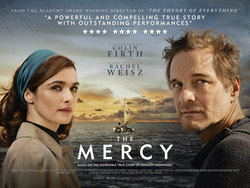 The incredible story of amateur sailor Donald Crowhurst and his solo attempt to circumnavigate the globe. The struggles he confronted on the journey while his family awaited his return is one of the most enduring mysteries of recent times.

‘The Mercy’ is an ordinary film about the extraordinary true story of Donald Crowhurst, an amateur sailor who attempted to sail around the world as part of the ‘Sunday Times Golden Globe Race’ in 1968. He was ill prepared and got into difficulties that led him to attempt to cover up his failure, meandering through the Atlantic instead of circumnavigating the globe as the competition intended. The film alternates between Crowhurst’s time at sea and his family and supporters on land, and I felt it struggled to tie both strands together successfully, with the moments on land halting the momentum and focus of the voyage.

The narrative of ‘The Mercy’ uses information from the logbooks to try and tell a story about what happened to Crowhurst whilst at sea and it is fitfully entertaining, albeit I couldn’t help but drift my mind to J.C. Chandor’s ‘All Is Lost’ starring Robert Redford, a far superior film about the perils of being lost at sea. ‘The Mercy’ portrays Crowhurst as a romantic who believed he could show the world that anyone with a boat could complete this achievement, but he was ultimately defeated by his own hubris. Depending on your perspective Donald Crowhurst is either an ambitious adventurer to be admired or a foolish man who put his life in jeopardy with minimal thought for his family, and I felt ‘The Mercy’ leaned too hard on the romantic angle. That is helped by the casting of Colin Firth as Crowhurst, who despite being 20 years older than Crowhurst was at the time, delivers an understated performance that brings through a decency that helps to balance off the stupidity behind many of Crowhurst’s actions. Rachel Weisz is also good as his long suffering wife although she only really gets one moment to shine (which she nails), and I also enjoyed the jovial performance from David Thewlis as Crowhurst’s press agent.

‘The Mercy’ has a strong story at its heart that was enough to keep me interested but it often felt rather formulaic and it never really gripped me as we headed towards its inevitable conclusion. Perhaps ‘Deep Water’, the 2006 documentary on the same subject, would give a greater insight into this fascinating story, or indeed, watch ‘All Is Lost’ for a truly great film about a man alone at sea.