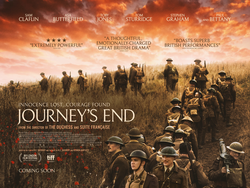 Set in a dugout in Aisne in 1918, it is the story of a group of British officers, led by the mentally disintegrating young officer Stanhope, as they await their fate.

Based on a 1928 play that has previously been adapted for the screen on five occasions, ‘Journey’s End’ is a film that focuses on the experiences of a British Army infantry company in the trenches during the final months of the First World War. As a result of its theatrical roots, this is a far more meditative and philosophical war movie than many of its contemporaries, exploring the impact of war on these men through dialogue instead of action sequences. Director Saul Dibb’s previous film ‘Suite Francaise’ was also set during wartime (albeit the Second World War in that case), and it was also an understated (if occasionally melodramatic) drama that delves into the wartime experience, which feels particularly timely in the year that marks the 100th anniversary of the Great War’s conclusion.

The plot of the film follows C-company, the latest unit who have arrived on the frontline to take their turn defending the territory against an impending German offensive. The company is led by Captain Stanhope (an excellent Sam Claflin), a weary soldier full of bitterness and regret who drinks to take away the pain caused by his experiences. It’s a character who could easily fall into cliché but Claflin’s well judged display avoids this, successfully capturing the intensity and soul of a man troubled and tired by a long time in the trenches. His unit is comprised of several other officers, played by Paul Bettany, Stephen Graham and Tom Sturridge, with Toby Jones also featuring as the cook for the men. They are joined by a young officer, Raleigh (Asa Butterfield), who has prior links to Stanhope and is primarily introduced as a fresh faced contrast to the jaded men who make up the remainder of the unit. The performances are very good throughout and there is an earnestness to the filmmaking that makes up for the stagey feel and the engineered conflicts that perhaps work better on stage than on screen.

Thanks to the performances and the strong source material, ‘Journey’s End’ is an engaging and thought provoking watch that breathes fresh life into a 90 year old play, albeit it never gripped me as strongly as I’d hoped it would.