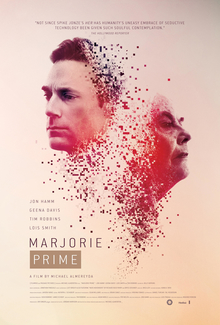 A service that provides holographic recreations of deceased loved ones allows a man to come face-to-face with the younger version of his late father-in-law.

For better or worse, ‘Marjorie Prime’ feels like an extended version of a ‘Black Mirror’ episode, with a science fiction tale set in a future not too different from our own. Adapted from a stage play (and it does struggle to move away from that grounding), it follows a family who make use of a service whereby you can purchase lifelike holograms of deceased relatives. Over time we see different generations of the family make use of the service, voice concerns about the technology, and muse over their reasons for utilising it. Is it for a sense of closure? To discuss unfinished business? And what does it tell us about the individuals by the age they choose to have their hologram appear as? The film explores these questions, and at its best, it can be a quite moving watch, but these moments feel a little fleeting for me.

Our first view into this technology is through Marjorie (Lois Smith), an elderly women with dementia who has been provided with a hologram of her late husband Walter (Jon Hamm) to provide comfort. She chooses a hologram of Walter when he was younger, perhaps a reflection of her happiest times with him, and mainly uses the service to get Walter to retell stories from their youth, particularly the story of how they met. Her daughter (Geena Davis) and her husband (Tim Robbins) both have differing views on the technology, and whilst their conversations do veer into too much exposition at times, it does shine a light on the themes the film is looking at. Regardless, both of them will go on to use the prime service later in their lives for different reasons, which the film will explore.

At its best, the film is a moving meditation on grief and loss, and it neatly explores the ways in which technology can both play a support and a hindrance in the journey towards moving on. I felt this was strongest in the later sections of the film with Tim Robbins character, which are really powerful and affecting. The performances are very good throughout, with Robbins and Lois Smith both standouts, and I did think the film had some powerful things to say about the human condition and how we cope with change and the challenges that life throws at us. ‘Marjorie Prime’ is an intelligent piece of science fiction that never truly manages to transcend it’s stage play roots, but it does have some interesting points to make and I am glad I watched it.