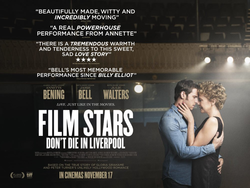 A romance sparks between a young actor and a Hollywood leading lady.

Gloria Grahame is one of the forgotten stars of the Golden Age of Cinema, with her legacy never quite reaching the level of some of her contemporaries. That may change slightly with ‘Film Stars Don’t Die in Liverpool’, a nice little film about her final years, where she spent some time on stage in the United Kingdom. During that time she shared a brief relationship with aspiring actor Peter Turner (Jamie Bell), whose memoirs are the basis for this film. Flashing between their early courtship and Gloria’s later health problems, the film has a lightness of touch that contrasts nicely with some of the more affecting material that comes later on.

Gloria Grahame is played by Annette Bening, who is perfectly cast and as good as you would expect in the role. She delivers a good impression of the screen siren, but also excels at delving into the emotional material that starts to increase in frequency as the film moves towards its inevitable conclusion. Opposite Bening, Jamie Bell is perhaps even better as the young man swept up by Grahame’s charms, and between them they elevate a by the numbers narrative. The supporting cast is also strong with the likes of Julie Walters and Kenneth Cranham getting an opportunity to shine, but this is Bell and Bening’s film, and they both make the most of it. The film really shines when it lingers on the nature of age and legacy and how this weighs heavily on Grahame’s mind, leading to the insecurities she often feels, but it also speaks to the timelessness of the stars of the past.

I felt that the material was often played safe and every development feels telegraphed (including a couple of contrived arguments), but the strong performances mostly make it work, and for the most part, I did enjoy ‘Film Stars Don’t Die in Liverpool’.