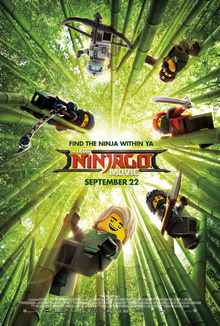 Shunned by everyone for being the son of an evil warlord, a teenager seeks to defeat him with the help of his fellow ninjas.

The third film in the ‘Lego’ movie series (can we call it a series?) is an expansion of a short film that played before ‘The Lego Batman Movie’ focusing on the ‘Ninjago’ toy line. In this film, ‘Ninjago’ is a city constantly under attack from an evil warlord called Lord Garmadon (Justin Theroux), with the city’s only protection coming from six ninjas who stand up against him. This part of the story is secondary to a father/son relationship, as Garmadon’s son Lloyd (pronounced L-Loyd and voiced by Dave Franco) inhabits the city of Ninjago and is used by the residents as a punching bag for his father’s actions. The film follows his attempts to bond with his father whilst also protecting the city from him, and an even greater enemy (admittedly one of the best jokes).

The narrative doubles down on the same elements that made ‘The Lego Movie’ and ‘The Lego Batman Movie’ such fun, with the real world encroaching on the Lego environment and the same winking humour, but it doesn’t feel quite as sharp or as fresh as the previous two films. This is compounded by a narrative that isn’t particularly engaging and I felt myself losing interest around the half way mark. I like most of the voice actors in the film but none of them were really given the opportunity to do a whole lot with the exception of Garmadon senior and junior, and I thought Justin Theroux’s voice was incredibly off-putting, largely because he sounded distractingly like Will Arnett (who of course voices ‘Batman’ in the ‘Lego’ films).

OK, I get the film is primarily aimed at kids, particularly with this outing being based solely off an existing toy line, but ‘The Lego Ninjago Movie’ does feel a lot more rushed with less humour and less charm than the previous entries in the series, and for me, this was a misstep.