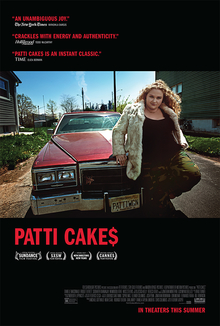 PATTI CAKE$ is centered on aspiring rapper Patricia Dombrowski, a.k.a. Killa P, a.k.a. Patti Cake$, who is fighting an unlikely quest for glory in her downtrodden hometown in New Jersey.

‘Patti Cake$’ is a really enjoyable movie about a young, female white rapper trying to get into the music industry whilst also trying to support her layabout mother and her sick gran. We first meet Patti (Danielle Macdonald) as she balances a part time job at a local bar in New Jersey with her hopes and dreams of making it as a rapper, spending most of her spare time with her friend Jheri (Siddharth Dhananjay) hanging out and practicing. As a white girl, she faces a couple of key barriers to breaking into an industry where she’d be far from the norm, but her weight also plays a big part in her self doubt and makes her an easy punching bag for some of the nastier characters we come across.

I was a little unsure about the film when it first started but it really grew on me, largely due to the uplifting streak it carries through it and Macdonald’s endearing performance. The film follows a really satisfying narrative path that hits some of the beats we’d expect from a film of this nature, with a few surprises along the way for good measure, and I did really enjoy the catchy music that features throughout. The use of Springsteen in a key early moment may be expected from a film set in New Jersey but it does set the tone superbly for a film that wants to focus on someone’s life with limited opportunities, and how this emphasises the need to dream of a better future, no matter how unrealistic those aims may seem.

The film has been compared in some quarters to Eminem’s ‘8 Mile’, largely I suspect because of its focus on a rapper and its use of rap battles throughout the narrative (albeit ‘Patti Cake$’ only has a couple of notes), and it does share some of that film’s underdog qualities. The relationship between Patti and her mother (Bridget Everett) is particularly well developed and I really liked how it delved into her mother’s past as a talented singer and how this played a part in her projecting her failures on to Patti. It helps that Macdonald and Everett have a believable chemistry with one another, and it’s undoubtedly one of the strongest aspects of a really good film.

I thought ‘Patti Cake$’ was a really enjoyable movie, led by Danielle Macdonald’s very good lead performance and a well written script that tells a satisfying story from beginning to end.