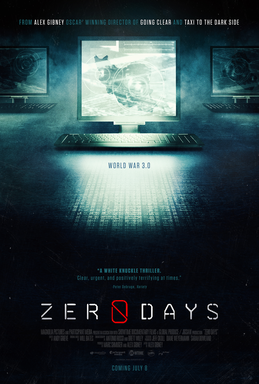 A documentary focused on Stuxnet, a piece of self-replicating computer malware that the U.S. and Israel unleashed to destroy a key part of an Iranian nuclear facility, and which ultimately spread beyond its intended target.

Alex Gibney is one of the finest documentary filmmakers operating in the business today, with his films covering such wide ranging topics as Lance Armstrong, Scientology and the WikiLeaks saga. His latest film is very much in the vein of the aforementioned WikiLeaks documentary as it delves into the world of cyber technology and the secrecy behind the ways in which governments and leading organisations are starting to utilise it in increasingly unethical ways. It’s a fascinating glimpse into some of the new ways in which countries are using technology to undermine their competitors, albeit hindered (through no fault of the filmmakers) by the lack of people willing to come forward to provide further insight. Considering what has happened to the likes of Edward Snowden, you can hardly blame them.

The film covers a wide ranging period from the Nixon era 70s right up until the present day, focusing on the shifting loyalties and partnerships between the US and (mainly) nations in the middle east, and how this dovetailed with the computer revolution and the wealth of new technology it brought with it. Gibney does a good job of drawing comparisons between US foreign policy and a series of computer viruses that were able to infiltrate high profile targets such as the Iranian nuclear program, and it shines a light on how countries like the US are covertly taking advantage of technology to develop new kinds of warfare. There’s no conclusive proof provided, but the implications of ‘Zero Days’ are clear, and it’s a fascinating yet frightening insight into the practices of some governments and intelligence agencies that are rarely uncovered, let alone reported.

‘Zero Days’ does struggle at times in articulating the type of technology involved and it’s effects, which I did find difficult as a layman viewer, but it’s much stronger when it focuses on the implications of such technology use. Nonetheless, ‘Zero Days’ is an intriguing documentary and it’s definitely worth a watch if the subject matter interests you.