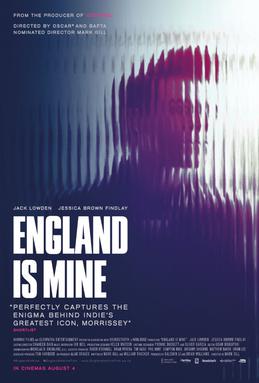 A portrait of Morrissey and his early life in 1970s Manchester before he went on to become the lead singer of seminal alternative rock band The Smiths.

There’s a good biopic to be made about the early years of Morrissey and ‘The Smiths’, but unfortunately ‘England is Mine’ isn’t it, despite a strong lead performance from Jack Lowden and fleeting moments of inspiration. Taking place during Morrissey’s late teens and early 20s and culminating in the moment he decided to form a band with Johnny Marr, the film is mainly a character study of the young Morrissey as he mopes around Manchester, going to gigs and writing letters whilst struggling with the banality of a boring daytime office job. I should point out at this stage that I consider ‘The Smiths’ as arguably my favourite band of all time and I continue to enjoy Morrissey’s solo output, so I should be the target audience for this kind of material (and I’ve read the autobiography of which this film is loosely based).

When we first meet Morrissey (or Steven as he goes by in these days), he’s the shy teenager we’ve came to know through his lyrics, and he spends most of his time listening to music, whether that be live or in his bedroom, and writing letters to the NME. That leads him to an encounter with Linder Sterling (Jessica Brown Findlay), a spikey, slightly older girl, who he befriends (perhaps unwillingly at first), and over this time we see him expand his writing to poetry and lyrics whilst starting to explore the possibility of joining or starting a band. Due to rights reasons, none of ‘The Smiths’ music features in the film which makes for a slightly curious experience (albeit the time period of the film is before the band formed), and the filmmakers use poetic voiceovers almost as a stand in, mostly to good effect. Lowden makes a strong impression as a young Morrissey and his display is the standout aspect of the film, even if he’s given limited material to work with, and the scenes of workplace boredom will be familiar and relatable to many who have found themselves in Morrissey’s position at this time.

‘England is Mine’ is a worthwhile film to check out for ‘The Smiths’ or ‘Morrissey’ aficionados, even if it’s not really telling us much that we didn’t already know about the man, but I can’t imagine there’ll be much to garner here for anyone who isn’t a fan.