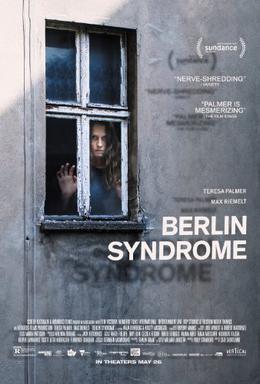 A passionate holiday romance leads to an obsessive relationship, when an Australian photojournalist wakes one morning in a Berlin apartment and is unable to leave.

‘Berlin Syndrome’ is a tight, suspenseful psychological thriller about an Australian backpacker who ends up being held captive by a German man she meets on her travels. The film begins as Clare (Teresa Palmer) arrives in Berlin as she travels around Germany exploring and taking photos, and the initial scenes successfully evoke the feeling of arriving in a new city for the first time, with the sense of adventure and discovery that this entails. She meets some people at a hostel from different parts of the world, before bumping into Andi (Max Riemelt) and striking a connection that will prove incredibly unlucky in the long run. Their connection is real and after they make love following a night out, it initially seems like an accident when Andi goes to work (as a teacher) and locks Clare inside the apartment. Clare, unwisely in hindsight, goes along with this, and after sharing another night together, she realises how much danger she’s in when she wakes up to another locked door.

The title, as you can probably guess, is a play on ‘Stockholm Syndrome’, and it relates to the inconsistent feelings Clare has towards her captor Andi across the course of her captivity and the runtime of the film. It’s hard to get a read on her at times, particularly when she shows affection towards Andi – is it genuine or is it a ploy? (or sometimes both). This makes the film incredibly gripping because you never know how either character is going to react next, with both capable of going from calm and affectionate to angry in a second. The film lasts for just shy of two hours and I was surprised at how effectively Cate Shortland and the performers managed to maintain the intensity in a film set almost entirely within an apartment, often with Palmer the only character on screen. Palmer’s performance is excellent throughout, as is Max Riemelt who delivers that calm demeanour that’s even more frightening than outright anger.

‘Berlin Syndrome’ is a tense, exciting thriller led by excellent direction and a couple of brilliant performances, and I really enjoyed it.