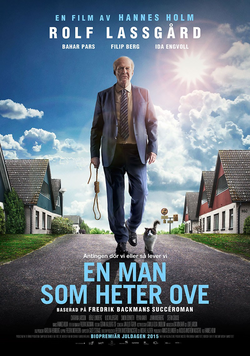 Ove, an ill-tempered, isolated retiree who spends his days enforcing block association rules and visiting his wife’s grave, has finally given up on life just as an unlikely friendship develops with his boisterous new neighbors.

Based on a celebrated novel by Scandinavian author Fredrik Backman, ‘A Man Called Ove’ follows the life of the cantankerous old man of the title as he falls out with his neighbours, shop workers and anyone who has the misfortune of coming across him. Behind the grumpy exterior of this man, the film starts to peel back the layers and explore his past, through his relationships with family and friends and the key events in his life that led him to become the man he is today, and this character study manages to achieve a great degree of emotional resonance that wouldn’t have seen possible at the outset.

Ove (Rolf Lassgård) lives alone in a gated neighbourhood, becoming increasingly difficult after the death of his wife Sonja six months earlier. He spends his days maintaining a strict routine (and woe betide anyone who interferes in it!), which includes doing his ‘rounds’ (aka complaining at anyone who doesn’t follow his ‘rules’) and visiting his late wife’s graveside with some flowers. One day, he makes the decision to take his own life, but he finds his attempts repeatedly and rudely interrupted by others, most notably by a new family who have moved in across the street. Despite his best efforts to resist, he starts to form a tentative bond with the new family and his outlook on life starts to widen from the nihilistic cloud that had taken over after Sonja’s death. This is complimented by the smart use of flashbacks covering the key moments in Ove’s life and they are skilfully blended with the moments in the present.

It’s a very funny film, in an acerbic way, and I can imagine some of the humour is perhaps very distinct to Sweden (particularly a running joke about the merits of driving a Saab, a Volvo, or god forbid a Renault car!). Ove is well played by Rolf Lassgård, who maintains a likeability about the character even when he is behaving poorly, and he really excels when he lets inklings of emotion come through in Ove’s internal thoughts. It’s a film that takes a depressing topic and manages to turn it into something quite moving, and even though the grumpy old man who rediscovers his heart is not an original idea, ‘A Man Called Ove’ has enough about it to make it stand out from the crowd, and I would recommend it.