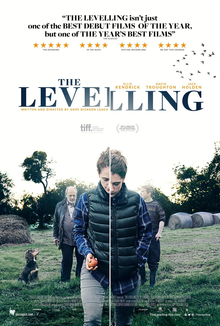 Somerset, October 2014. When Clover Catto (Ellie Kendrick) receives a call telling her that her younger brother Harry (Joe Blakemore) is dead, she must return to her family farm and face the man she hasn’t spoken to in years: her father Aubrey (David Troughton).

‘The Levelling’ is such an assured and accomplished feature that it’s hard to believe this is Hope Dickson Leach’s debut film. Set in the aftermath of the Somerset floods in 2014, the film centres on Clover Catto (an outstanding Ellie Kendrick), a young woman who returns to the family farm she hasn’t visited in years after she finds out her brother has died. On her return, she discovers a farm in disrepair following the floods and her father Aubrey (David Troughton) remains the difficult man she never got along with in the first place. The film follows her attempts to find out what happened to her brother against this backdrop, whilst also coming to terms with who she is as a person, and how she can reconcile her past with her present.

I thought this was an excellent movie, really thoughtful with a lot to say about rural communities, and I felt the character of Clover was superbly realised by a sharp script and Ellie Kendrick’s moving performance. Kendrick is likely best known to viewers as Meera Reed in ‘Game of Thrones’ and she shows a degree of vulnerability here underneath the steely exterior that makes her display all the more compelling. Dickson Leach is composed behind the camera, content to allow the narrative to unfold patiently and her use of lengthy shots really serves to enhance the immersion of the world these characters inhabit. Clover’s relationship with her father Aubrey is established as complex from the outset through the body language of Kendrick and Troughten and their interactions become more important as the film moves on and we learn more about the events that led to this point, ultimately culminating in an incredibly powerful sequence.

‘The Levelling’ is a very strong piece of independent British cinema, driven by a terrific lead performance from Ellie Kendrick and strong direction from Hope Dickson Leach, marking both of them out as one’s to watch over the coming years.