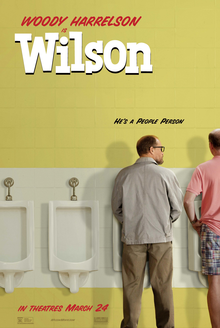 A lonely, neurotic and hilariously honest middle-aged man reunites with his estranged wife and meets his teenage daughter for the first time.

Based on a graphic novel, the latest film from Craig Johnson is the tale of a grouchy middle aged man who tries to kick start his life after discovering he has a teenage daughter, with middling results. The titular character is played by Woody Harrelson, and he’s great once again as the lonely and cantankerous man at the centre of this movie, even if the film around him isn’t as strong. I’d watch Woody Harrelson in anything and he manages to make this film more enjoyable than it otherwise would have been, largely due to a charismatic performance that imbues a difficult character with elements of likeability.

The film begins by introducing us to Wilson and we follow him through his daily routine, where his only interactions come with his dog (and some strangers who don’t want to know), and we see him get irritated by people and the world around him. He’s not likeable per se and wouldn’t be a pleasant person to spend time with (at least not initially), but I found him quite funny and his musings on the world and modern social norms I found fairly relatable. I subscribed more to his theory that he’s right and it’s the world that’s wrong in many instances! When the film starts to switch focus as he discovers the daughter he never knew he had it loses a little of his misanthropic worldview and whilst there is some sweetness in his clumsy attempts to connect, it never engaged me as much as the opening parts of the film. There is also the issue that the film surrounding Harrelson isn’t quite as strong, despite a good supporting cast including Laura Dern, Judy Greer and a brief, but memorable turn from ‘character actress’ Margo Martindale.

Craig Johnson’s last film, ‘The Skeleton Twins’, was a raw and powerful piece of work that went under the radar here, so I was keen to check this out and whilst it isn’t on the same level as the aforementioned film, I did find moments to enjoy in ‘Wilson’, mainly down to Harrelson’s easy going and fun performance.