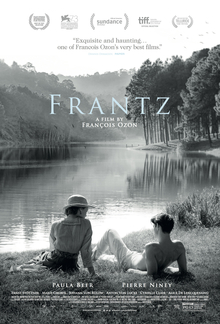 In the aftermath of WWI, a young German who grieves the death of her fiancé in France meets a mysterious Frenchman who visits the fiancé’s grave to lay flowers.

The latest film from French director Francois Ozon is a tale set in a small German village in the aftermath of the First World War, focusing on a local woman (Paula Beer) grieving the death of her fiancé (the Frantz of the title) in the war. One day, she notices another man, Adrien, (Pierre Niney) visiting her fiance’s grave, and this man turns out to be a Frenchman who was friends with Frantz before the war, who has came to town to pay his respects. The two begin to form a connection over the man they both lost, and Ozon starts to explore this relationship in greater detail against a backdrop of wider, more encompassing themes.

The film is interested in exploring how people responded to the end of the war, trying to get back to their lives once the dust has settled. The animosity between people from different backgrounds still holds, shown largely through the negative reactions from the local townsfolk to the visiting Adrien, and the subsequent reaction when Anna visits France later in the film. Ozon doles out key pieces of the narrative at steady intervals for maximum effect, although I did feel that the direction the plot moved in was fairly straightforward to figure out and lacked the punch he was going for.

It’s a handsomely made film, shot in a beautiful monochrome design that really enhances the character’s facial expressions, but I felt that the material wasn’t quite as engaging enough to match. ‘Frantz’ is a melancholic and humane look at the way people recovered after the war, seen through the eyes of two wounded souls, and whilst it’s not Ozon’s finest work, it’s a solid entry to his repertoire.