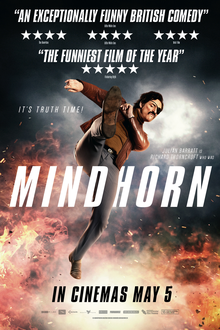 A has-been actor best known for playing the title character in the 1980s detective series “Mindhorn” must work with the police when a serial killer says that he will only speak with Detective Mindhorn, whom he believes to be a real person.

‘Mindhorn’ is a funny British comedy revolving around a fading 80s TV star who is drawn back to his most famous character to assist with a criminal investigation. Julian Barratt is Richard Thorncroft, the star of the 80s cop series ‘Mindhorn’, a show about a superpowered cop who could literally see the truth, and the opening sequences brilliantly pastiche the style and tone of cheap 80s TV series in ‘Garth Marenghi’ esque fashion. It becomes clear early on that Thorncroft’s career is now virtually non existent, although he still harbours a sense of delusion about the regard held for his most famous role. When a murder suspect and ‘Mindhorn’ fanatic demands to only speak to ‘Mindhorn’ himself (who he believes to be real), Thorncroft jumps at the chance of publicity and heads back to the Isle of Man where the series was set to save the day.

I thought ‘Mindhorn’ had a strong premise and it made me laugh a lot throughout, whilst also delivering a degree of pathos when it focused on the tragicomic elements of Thorncroft’s now non existent career. There are hints of sweetness and sadness to the character of Richard Thorncroft and I did sympathise with how his life and career had turned out. Of course, the fact that most of the people surrounding him are uniformly awful (Steve Coogan and Simon Farnaby as former co-star and stuntman are both hilariously terrible) helps, and it makes it a lot easier to root for his success. The jokes are very well constructed, with many jokes set up earlier in innocuous ways, and I thought the performances struck the right knowing tone in terms of playing the material straight or for laughs. The premise does struggle to fill out a feature length runtime, but the plot moves along solidly enough and there are enough laughs throughout to maintain entertainment levels.

‘Mindhorn’ isn’t the best comedy you’ll ever see, but in a year lacking in strong comedies, it’s always enjoyable to see an entertaining, original effort, and I found a lot to like about ‘Mindhorn’.