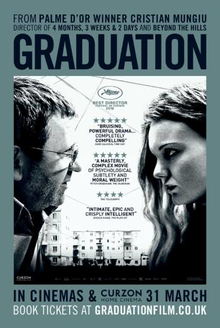 A film about compromises and the implications of the parent’s role.

‘Graduation’ is an engrossing drama from Palme D’or winner Cristian Mungiu about a doctor in a small Romanian town who is trying to help his daughter get into university. The film begins as Eliza (Maria-Victoria Dargus) is due to sit her first exams, when an unknown man assaults her after her father has just dropped her off at school. This understandably throws her off the impending exams and threatens her ability to achieve the results required to guarantee a scholarship in the UK that she’s been building towards. Much of the film from this point is focused on her father Romeo (Adrian Titieni) and his attempts to help Eliza achieve the necessary grades, largely through less than ethical means, and through this core narrative the film starts to explore the state of modern Romania and how this can impact on ordinary people’s lives and their futures.

I felt the film was very intelligent and naturally crafted, portraying its characters with complexity and shades of grey, allowing the audience to consider and empathise with their actions, even when they may be ‘wrong’. Romeo is shown to be a good man who doesn’t take bribes or payments in his work as a doctor (a behaviour that is common practice according to ‘Graduation’), but he is also in a relationship with two women and regularly displays hypocritical behaviour. As well as the attack on his daughter, several other troubling events occur, such as a broken window and a broken car windscreen, and I felt they were meant more metaphorically than literally to depict the ongoing tension and dangers of living in this part of Romania.

The injustice of his daughter’s situation drives him to seek alternative ways to help her out, and the script starts to explore the morality behind Romeo’s response. His actions are partly driven by the regrets about his past and the decisions he made when he was younger, but he also weighs up his moral compass versus the threat to Eliza’s future if one traumatic event led to her missing an opportunity to dramatically change her life. ‘Graduation’ presents a view of Romania as a country that is troubled by corruption to the extent that it’s widespread at all levels of society, but it also shows why many people are driven to call in favours to help get on in life. I liked that the film keeps the motives of many of its characters ambiguous and there’s an air of tension around many of the interactions, and I felt this helped me to understand Romeo’s pain and mistrust at both individuals and the system.

I’ve not seen any of Cristian Mungiu’s earlier, critically acclaimed films, but I felt that ‘Graduation’ was a strong piece of cinema and I’m keen to see more of his work.