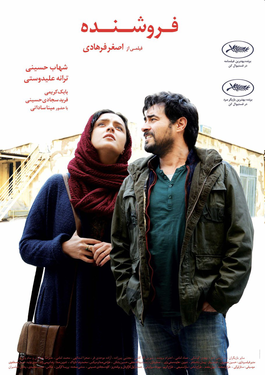 Forushande (The Salesman) is the story of a couple whose relationship begins to turn sour during their performance of Arthur Miller’s Death of a Salesman.

Over the last few years, Asghar Farhadi has swiftly established himself as one of the leading directors in world cinema, with his compassionate and naturalistic portrayals of people dealing with complex and difficult situations leading him to a second Oscar win after the incredible ‘A Separation’. ‘The Salesman’ isn’t on the level of the film that won him his first ‘Best Foreign Language Film’ Academy Award, but it is a compelling and multi layered depiction of the impact of a disturbing event on the people involved. ‘The Salesman’ is about a young Iranian couple who are preparing for an adaptation of Arthur Miller’s ‘Death of a Salesman’, when Rana (Taraneh Alidoosti) is assaulted in their new apartment, and the film mostly deals with the fallout from this incident.

Farhadi’s approach attempts to use the plot of ‘Death of a Salesman’ as a parallel to the experiences Rana and Emad (Shahab Hosseini) are going through, and whilst the similarities are clear, I didn’t feel like it was weaved in smoothly and it came off a little heavy handed. Fortunately, the primary plot is more engaging and there’s an intensity to the performances from Alidoosti and Hosseini that highlight the devastating consequences of a violent attack. For the most part, we follow Emad as he attempts to track down his wife’s attacker, and this becomes more interesting the closer he comes to the truth. I thought it was particularly telling that we mostly view the aftermath of the attack through Emad’s view and not through Rana, the actual victim, and I think it speaks volumes on gender attitudes in Iran (although by proxy, many other countries who would consider themselves more liberal as well). It’s Emad who decides not to involve the police, who decides what to do once he finds the assailant, and at no point does he stop to consider how Rana feels about the situation, with his mind so clouded by revenge and his perceived role as the male protector. In many respects the film is about the corrupting nature of the quest for revenge, particularly with respect to how this single minded approach ultimately does more harm and starts to impact on the things that really matter in life.

I also felt the film was really good at critiquing the contradictions in a deeply religious and conservative society, where the male characters involved want to be seen as good family men, but then share the same base instincts for violence and sex as in more liberal or secular societies. The pacing isn’t always as slick as it could be and ‘The Salesman’ does take its time in approaching its key moments, but once it gets there it masterfully delivers on its promise. It shines when the moral questions that have been established are explored in interesting and thought provoking ways, and the audience are challenged in their preconceptions. Farhadi has always been good at crafting empathetic characters, where we may abhor their actions, but we can at least understand them, and ‘The Salesman’ does a really strong job of building on this to deliver satisfyingly on its themes, and I thought it was a really strong film overall.