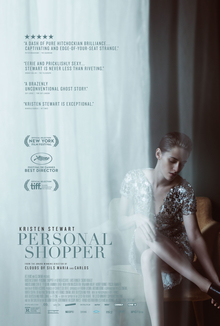 Revolves around a ghost story that takes place in the fashion underworld of Paris.

Since I saw ‘Personal Shopper’, I’ve thought about it a lot and I’m still not sure what it’s really about. The latest film from French director Olivier Assayas effortlessly glides between genres and tones without allowing itself to be pinned down to a succinct description, and I thought it was a very effective piece of cinema. The film stars Kristen Stewart as Maureen, a young American in Paris who is working for a fashion designer, Kyra, as a ‘personal shopper’, ie someone who buys various expensive goods for a rich person with limited time on their hands. It’s a lonely existence, characterised by the film through the majority of scenes where Maureen is either alone, or interacting with workers in the shops she frequents for her boss. This is compounded by her unresolved grief over the death of her twin brother, who she frequently tries to communicate with at different points in the film.

If you wanted to try and classify the film you could call it a ghost story, both in terms of Maureen’s lonely existence and in the more literal sense when she tries to make contact with her deceased brother, but that would do a disservice to a film that has a lot more bubbling under the surface. The film is played almost entirely straight and it’s all the more frightening and unsettling for it, and I found the hairs standing on the back of my neck at times, particularly in the moments when Stewart wanders through an empty house. Kristen Stewart is in virtually every scene, often acting alone, and it’s an outstanding, captivating display. She worked with Assayas on ‘Clouds of Sils Maria’ and won a Cesar award, and it’s clear he brings out the best in her, and this continues a strong run of performances in her post ‘Twilight‘ career.

‘Personal Shopper’ moves more into the territory of a suspense thriller when Maureen starts receiving texts from a mysterious individual and the film manages to make a cat and mouse text exchange far more compelling than it should be. It creeps into voyeuristic territory at points, primarily through a mesmeric sequence where Maureen tries on Kyra’s outfits in her house which is both seductive and unusually suspenseful. If there’s a criticism of the film, it’s that it doesn’t really go anywhere and I didn’t feel like the ending landed as well as it could have done, but ‘Personal Shopper’ is an intriguing piece of cinema led by a revelatory Kristen Stewart performance and it’s a film I’d like to see again.