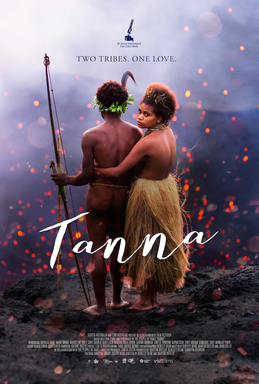 Set on a remote Pacific island, covered in rain forest and dominated by an active volcano, this heartfelt story, enacted by the Yakel tribe, tells of a sister’s loyalty, a forbidden love affair and the pact between the old ways and the new.

‘Tanna’, the first film set on the island of the same name in Vanuatu in the South Pacific, is a gorgeously shot piece of filmmaking about a couple who go against the wishes of their parents and their tribes to be together. The premise may sound much like that of ‘Romeo and Juliet’, and whilst there are similarities, this is based on a true story, and despite the familiar tale, I found ‘Tanna’ to be more effective than I expected and I was really taken by it. It was Australia’s submission for the ‘Best Foreign Language Film‘ at this year’s Oscars, and achieved a nomination despite a high degree of competition this year.

I think there’s two main factors I can pinpoint to explain my feelings about the film. The first relates to the wonderful setting which feels tailor made for filmmakers, and indeed it was a previous trip to Vanuatu that drew director Bentley Dean back to the island to make this movie. The location has a feel of the mythical and untouched about it, and the culture we’re given an insight into feels fascinatingly otherworldly and distant. In terms of the premise of the film, it follows a fairly predictable path as it escalates a conflict and gives the lead characters a difficult and in some respects, impossible choice to make, but it’s beautifully played and beautifully crafted. The second factor is the higher than expected calibre of acting, mostly from locals who are playing themselves, and this certainly helps in the naturalistic and real feel of the performances. Most of the cast members will never have seen a film before, let alone been in one, and it’s remarkable how strong these non-professionals are.

The visual palette is colourful and the directing really brings this beautiful setting to life, particularly when the opportunity arises to use the backdrop of the volcanic rock on the island to shadow its characters at a couple of key moments. The directors (Dean and Martin Butler) have a strong handle on the type of film they’re trying to make, and by keeping the story on the simple side, they allow the cinematography and the emotion of the performers to bring the story to life. Films like ‘Tanna’ are important in expanding mindsets and in helping others to learn about different cultures, and this is definitely successful in that regard. I thought ‘Tanna’ was a vibrant piece of filmmaking that handles its subject matter with a great degree of care and attention, and I’m glad I got the opportunity to see it.