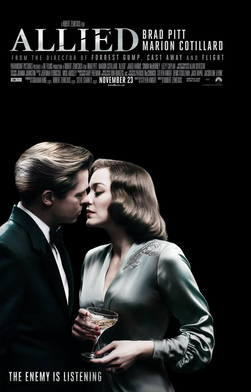 In 1942, an intelligence officer in North Africa encounters a female French Resistance fighter on a deadly mission behind enemy lines. When they reunite in London, their relationship is tested by the pressures of war.

‘Allied’ is a flawed, but deeply engrossing and entertaining romantic wartime drama, centred around the relationship between two spies. The film begins in Casablanca (if this sounds a little clichéd it most certainly is and the way the film plays it doesn’t help), as Brad Pitt’s intelligence officer arrives on a mission to assassinate the German ambassador with assistance from a French resistance fighter (Marion Cotillard). As the two plan their mission they fall in love and after their work is complete, Max (Pitt) persuades Marianne (Cotillard) to accompany him to London where he’ll be taking on a more mundane desk job, albeit still close to the details of the war.

The central premise of the film focuses on Max’s superior’s suspecting that Marianne is a german spy, and ‘Allied’ really comes into its own when it allows these suspicions to play out, keeping the audience guessing along the way. A large part of this being successful comes down to Marion Cotillard’s mesmeric performance that beautifully blurs the lines between truth and lies and she kept me guessing right up until the reveal. Brad Pitt feels slightly miscast opposite her, although he does some good work once he learns of the suspicions about his wife and he plays the internal conflict well, but in the early goings he feels a little stilted. The film is undoubtedly over engineered and over directed at times, with some ridiculous dialogue and one of the most unintentionally bad sex scenes of the year, but I felt the positives more than outweighed the negatives, and once the film moves to London it became incredibly tense and gripping. Zemeckis is often reaching for epic status but too often it comes off as forced and the Casablanca scenes in particular don’t feel grounded or real.

I felt ‘Allied’ was well paced and the time in the cinema flew by, and between the performance from Marion Cotillard and the thrilling second half it more than overcomes some of its flaws, and I really enjoyed it.