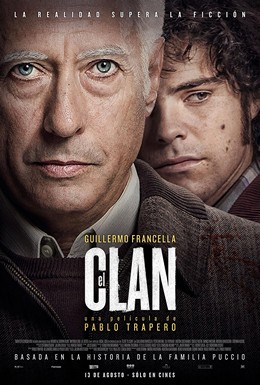 The true story of the Puccio Clan, a family who kidnapped and killed people in the 80s

‘The Clan’ is one of those films based on a true story that almost seems too unbelievable to be true, focusing on an Argentinian family who obtained a higher standard of living through a spree of kidnappings and murders in the early 1980s. That family is the Puccio’s, headed up by the icily psychotic Arquimedes (a superb Guillermo Francella), and they initially appear to be a typical middle class family who fall on harder times due to Arquimedes job becoming surplus to requirements at the end of the Falklands War. Instead of seeking new employment or downgrading their lifestyle, Arquimedes and his middle son Alejandro (Peter Lanzani) start targeting wealthy families and kidnapping people for substantial ransoms in order to sustain their lifestyle.

The film is very much a slow burner, particularly at the outset, and I think it struggles to explain its premise and how the political environment at the time was affecting Argentina and its people. More importantly for the film’s focus itself, I didn’t feel like we got a sense of the financial aspirations of the Puccio family and how that led them down such a dark path. Fortunately, the film picks up very quickly and ‘The Clan’ becomes a fascinating and engrossing insight into a family who committed monstrous crimes. It’s often brutally violent, with the actions on screen regularly contrasted with jaunty pop music on the soundtrack which serves to create a slightly jarring and unnerving tone (this is best shown in an audacious fusion of sex, violence and music around the film’s mid point). Part of what makes the film so disturbing is how matter of fact the family’s actions all seems, with the whole process treated much like a business with proper planning and execution (literally) all thought out. This is intensified by the film’s focus being kept squarely on the family, with no perspective from the victim’s side or from the police trying to investigate the kidnapping and murders. This is particularly intriguing from a structural perspective to narrow the focus in a film with this subject matter, and it marks a very different approach from what we’d expect to see in an American film on a similar topic.

The narrative covers a period of time from the end of the Falklands War to the eventual discovery of the family’s crimes and the film does a good job of showing the transition of some of the key characters over this time. The impact of the events show most on Alejandro who starts to move away from the family business after one kidnapping he helped set up goes wrong, and Peter Lanzani delivers a good performance as a young man struggling to balance his loyalty to his family with their actions. The star of the piece, however, is Guillermo Francella as the family patriarch, with ice cold eyes and a calm demeanour that becomes increasingly unsettling as we learn about how much he is at ease with his actions. As this is based on a true story there’s a natural fixed end point and it doesn’t disappoint when it comes, and ‘The Clan’ is a worthwhile and entertaining recollection of a nasty sequence of events from Argentinian history.