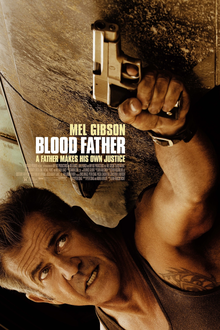 An ex-con reunites with his estranged wayward 17-year old daughter to protect her from drug dealers who are trying to kill her.

Mel Gibson’s not been particularly prolific over the past ten years, largely down to a series of personal problems and controversies that have distracted from his work both in front of and behind the camera. That timing’s been unfortunate for a number of reasons, robbing the public of one of the best actors in the business and preventing Gibson from taking advantage of the recent spate of action films starring older performers such as Liam Neeson. In ‘Blood Father’, Gibson corrects that, and it’s one of the best entries in this subgenre featuring a man that should have been the go to man for many of these types of films in the first place.

‘Blood Father’ is a very functional thriller and I mean that as a compliment. It has a simple storyline focusing on an ex-alcoholic called John Link (Gibson) who lives in a trailer park after a spell in prison, when he is drawn back into violence due to his estranged daughter (Erin Moriarty) getting involved with a violent gang. There aren’t many surprises in how this plays out, but the thrill of ‘Blood Father’ is how effective it is at playing within the parameters it sets for itself and it’s well paced and strongly directed by French veteran Jean-François Richet. Mel Gibson has always been a great screen presence and he’s used to good effect here, balancing charisma and a knowing smirk with a violent streak that comes out in several intense sequences. I enjoyed the performance of Erin Moriarty as his daughter, and William H. Macy is a reliable foil as Link’s sponsor (albeit an underused foil).

‘Blood Father’ is a film with modest aims and therefore modest expectations, but it comfortably meets those expectations, largely through a convincing performance from Mel Gibson, who I hope will return to action cinema with greater frequency.