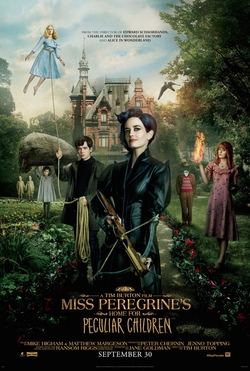 When Jacob discovers clues to a mystery that stretches across time, he finds Miss Peregrine’s Home for Peculiar Children. But the danger deepens after he gets to know the residents and learns about their special powers.

There haven’t been many matches more suitable than Tim Burton and Ransom Riggs 2011 novel ‘Miss Peregrine’s Home for Peculiar Children’, so it’s disappointing that Burton doesn’t put his stamp on it as fully as you would like. It’s been a fairly middling past decade for Tim Burton and this film is another that falls into the good, not great category, as he delivers a typically weird adaptation that somehow lacks the energy and emotion to tie all of the story’s themes together. The film tells the story of a group of ‘peculiars’, children with special abilities (not unlike the X-Men, a comparison that’s been made elsewhere) who are guarded at a children’s home on a Welsh island by Miss Peregrine (the perfect Eva Green), a woman with the ability to control time (and who can also turn into the bird of her name). Our viewpoint into this world comes through Jake (Asa Butterfield), a teenager from Florida whose grandfather (Terence Stamp) used to live at the children’s home, and he soon gets swept up into this magical environment.

The film’s main selling point is the imperious Eva Green, who is pretty much perfect in everything she’s been cast in. Fresh off a magnetic turn in the TV series ‘Penny Dreadful’, she’s terrific as Miss Peregrine, charming the hell out of every scene and holding your attention. She’s not actually in the film all that much but she’s the best thing every time she’s on screen, whilst the performances from the young cast are great as well, with Ella Purnell a revelation in particular. Asa Butterfield’s Jake is pretty much a blank slate to support the craziness surrounding him and Butterfield is a competent enough performer, but ultimately I cared more about the other characters. The film has some typical Burton flourishes with some inventive use of stop motion and his ability to blend the macabre, gothic imagery and humour is second to none, but a lot of this is overshadowed by a messy finale that feels a little too outlandish, even for material such as this.

Time travel plays a large part in the narrative and it’s crucial to developing the emotional threads, although it’s probably not worth dwelling on the logistics of how it all works out! In one of the film’s best scenes, Miss Peregrine gathers the children outside to reset the time to the beginning of a particular day in 1943, to avoid a WW2 air bombing that would destroy the children’s home and to maintain cover from a group of rogue peculiars (led by an over the top Samuel L. Jackson, who even now I can’t decide whether he was great or terrible!). This time loop prevents the children from ageing and provides some strong notes for Butterfield and Purnell to play off, particularly when considering the history with Jake’s grandfather, and I thought the film delivered a lot of poignancy in these moments. Unfortunately we don’t spend long enough in these moments and the film rushes to a silly conclusion that doesn’t deliver on the intrigue and promise that’s been built up.

‘Miss Peregrine’s Home for Peculiar Children’ isn’t Tim Burton at his finest, but it maintains his distinctive visuals and tone and with Eva Green on top form, at its best it’s hard to resist.