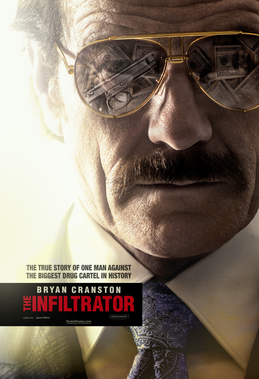 I was pleasantly surprised by ‘The Infiltrator’, a film I thought looked solid enough to pass the time, without expecting it to truly grab me. I’m glad to say it exceeded those expectations, delivering a well crafted movie out of strong material, with excellent performances from a terrific cast. The film is set during the 80s, focusing on a US special agent who goes undercover to infiltrate Pablo Escobar’s cartel, posing as a middle man who can help drug lords launder their dirty cash. Based on a compelling true story, Brad Furman directs the material solidly and whilst the film could have done with sharper editing and a shorter runtime, it holds your attention and provides valuable insight into its subject matter.

Bryan Cranston may have been nominated for an Oscar for his performance in ‘Trumbo’, but for my money he’s even better here, convincing as both the conflicted family man and as the tough undercover money launderer who is comfortable around extremely dangerous individuals. His outstanding turn in ‘Breaking Bad’ isn’t too far away in style from Bob Musella, but Cranston really nails the charisma of this guy and his performance is a lot of fun to watch. Cranston’s performance is one of ‘The Infiltrator’s’ selling points but the acting across the board is at an incredibly high level and helps to elevate the material in some of the less interesting moments. Benjamin Bratt was my personal favourite as he manages to make the audience sympathetic towards a ruthless criminal who makes his money off the drug trade, whilst Diane Kruger is as convincing as she’s ever been as Musella’s ‘fiance’. Completing the core quartet, John Leguizamo provides most of the laughs and light relief as Bob’s partner and the levity is badly needed at times.

‘The Infiltrator’ is a captivating take on an engrossing real life story, with the uniformly terrific performances from a strong cast enough to keep the audience engaged when the screenplay occasionally falters. This isn’t going to win any awards, but I’m always pleased to see strong dramas aimed at an adult audience, and ‘The Infiltrator’ meets the mark in this regard.