The Girl with All the Gifts 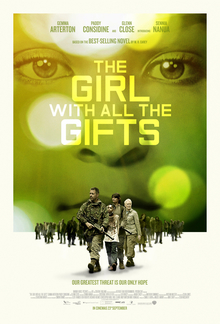 A scientist and a teacher living in a dystopian future embark on a journey of survival with a special young girl named Melanie.

It would be fair to say the zombie genre has became overly saturated in recent years, with both the ongoing success of ‘The Walking Dead’ on TV and countless films, ranging from great (’28 Days Later’) to the mediocre and the not so good. ‘The Girl with All the Gifts’ follows the lead from ’28 Days Later’ in choosing not to refer to the antagonists as ‘zombies’ but where it does set itself apart as a more interesting and original work is in its approach to well worn material. Based on an acclaimed novel and adapted for the screen by M.R. Carey, ‘The Girl with All the Gifts’ is a tense and unnerving zombie movie with more to say for itself than many of its contemporaries.

The setting is key to ‘The Girl with All the Gifts’ in terms of setting the tone, and this is expertly established with a chilling opening as we’re taken on a tour around an army base where a group of children are locked up in cells by themselves. It’s apparent from the outset that these are no ordinary children, but the screenplay never feels the need to spell it out for the audience and details are teased throughout the opening as to why the children are locked up. Our main viewpoint is through a young girl called Melanie (Sennia Nanua), whilst adult support is provided by a school teacher (Gemma Arterton), a doctor (Glenn Close) and an army sergeant (Paddy Considine). When the base is attacked, the film turns into more of a road movie (the similarities with ’28 Days Later’ become more apparent here) as the core group search for help, resources and safety.

The performances are strong throughout the cast but it would be hard to not cite the excellent display from newcomer Sennia Nanua, in a role that requires her to hold the audience’s sympathy yet give off a sense of fear and danger. Her performance is mature for someone so young and incredibly nuanced at balancing the feral urges of her character with the natural childlike urge to learn. The way the film is compiled shows a mastery of tone and atmosphere, with a creepy, immersive score that provides an off kilter feel to proceedings and a level of suspense that keeps the viewer on edge throughout. The film is at its finest when it explores the nature of being human and asks big questions that forces the viewer to ponder who we should really be rooting for, and whilst the final act of the film doesn’t fully deliver on this promise, it’s intriguing nonetheless.

In the latter stages the film does start to fall victim to some genre tropes, with characters making rash and irrational decisions and an approach to thinning the cast that won’t surprise anyone who has read the cast list or watched a horror film before, but ‘The Girl with All the Gifts’ overcomes these hiccups with an assured hand and a strong handle on its material. This is an uncompromising zombie thriller with strong performances and a superbly maintained level of tension and whilst it doesn’t fully stick the landing, it’s worth the time and effort.