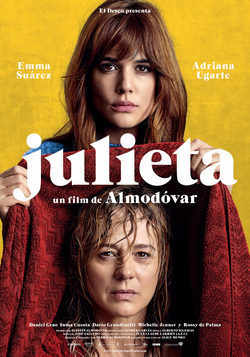 After a casual encounter, a brokenhearted woman decides to confront her life and the most important events about her stranded daughter.

The latest film from esteemed Spanish auteur Pedro Almodovar is a decade spanning melodrama taking in themes of grief, loss and regret, through the eyes of the titular character, played in her youth by Adriana Ugarte and by Emma Suárez in the present. The film begins in the present day as Julieta is getting ready to leave Madrid with her lover, Lorenzo (Dario Grandinetti), when a chance encounter on the street with one of her daughter’s old friends brings back a series of memories. To this point there’s been no mention of her daughter Antia, and to find out more the narrative jumps back 30 years in time to a train journey where Julieta would meet Xoan (Daniel Grao), who she would go on to fall in love with. ‘Julieta’ is structured like a mystery, but the film is less about the endpoint and more about the journey Julieta takes to essentially achieve closure on her past.

Part of the charm with ‘Julieta’ is in how richly crafted it is and I was immediately sucked into the story, even though there’s no obvious dramatic hook to lure you in. Part of that is Almodovar’s melodramatic style, but the central performances are the primary reason. Julieta is performed by Ugarte and Suarez at different stages of her life and both performers are wonderful, Ugarte superbly captures her youthful exuberance and happiness, whilst Suarez’s portrayal of a woman worn down by events in the past lends the material a heavier emotional weight. The biggest surprise with ‘Julieta’ in some respects is how simply everything plays out, with the film almost teasing a bigger conclusion then settling for something more straightforward. I must confess to having not seen much of Almodovar’s previous work, with my opinions split from seeing the phenomenally twisted ‘The Skin I Live In’ and his most recent misfire ‘I’m So Excited’, but ‘Julieta’, for all its pleasures, didn’t ignite the same giddy passion in me as ‘The Skin I Live In’ did.

‘Julieta’ is an entertaining and compelling female led melodrama, with terrific performances from its central duo. Its inherent mystery turns out to be window dressing in many respects, but when the elements surrounding it are as satisfying it hardly matters.