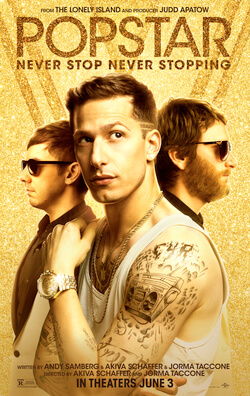 When it becomes clear that his solo album is a failure, a former boy band member does everything in his power to maintain his celebrity status.

There have been many attempts at the music mockumentary over the years since the masterpiece that is ‘This is Spinal Tap’ and nothing’s really came close, but ‘Popstar: Never Stop Never Stopping’ gives it a good go, updating the format for a modern audience and parodying recent serious (if that’s a fair term!) music documentaries on the likes of Katy Perry and Justin Bieber in particular. In this film, we follow a spoilt, rich popstar called Conner4real (Andy Samberg), who made it famous in a cheesy boyband before going solo. It picks up with him just before the impending release of his second album and subsequent tour, and we follow him around as things don’t quite go according to plan…

Samberg’s made a career out of playing man children and it’s largely because he’s really good at it, and he’s great again here. He also wrote the script alongside his ‘The Lonely Island’ bandmates Akiva Schaffer and Jorma Taccone, who both appear as well. The narrative plays out much as you would expect but the fun comes from anticipating the punchlines and from the heightening ridiculousness of some elements of the plot (an incident with Seal and a wolf had me laughing for ages). The film does run out of steam towards the end after a particularly strong start and the songs lack the zip of some of the earlier parodies from ‘The Lonely Island’, not to mention the terrific Chris Lilley creation ‘S’mouse’ from his TV series ‘Angry Boys’, but Samberg has an infectious persona and he holds everything together and makes just about everything work.

There’s a lot of celebrity cameos, primarily as talking heads, and this is often pretty funny and meta, although it does become a little bit too winking at times, although it’s always enjoyable seeing well known faces play slightly different slants on their regular persona. ‘Popstar: Never Stop Never Stopping’ is a good parody, managing to balance the absurd with subtler insights effectively and it’s a solid entry into the music mockumentary subgenre.