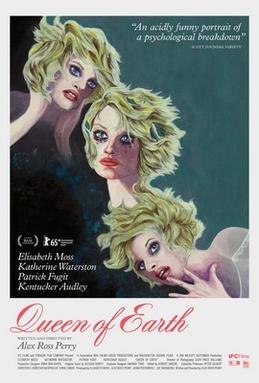 Two women who grew up together discover they have drifted apart when they retreat to a lake house together.

‘Queen of Earth’, the latest film from Alex Ross Perry, is a disappointing follow up to the thought provoking ‘Listen Up Philip‘, with a narrative that doesn’t seem to go anywhere and a cast of insufferable characters. The film wallows in misery with no room for any kind of levity, and it’s kind of a suffocating experience for the viewer. The film follows Catherine (Elisabeth Moss), a woman who goes to stay with her friend Ginny (Katherine Waterston) in her lake house retreat after the death of her father and the end of a relationship. Taking place over a week, the film occasionally flashes back to a year previous at the same place to look at a happier point in Catherine’s life, whilst spending most of its time in the present as Catherine shuts everyone out.

Elisabeth Moss is a terrific actress and she does her best with a thankless role, but it’s hard to really get into her character. We sympathise with her because she has undoubtedly went through a couple of traumatic experiences, but she refuses to open up and the film has no interest in letting us in, and this distance makes it difficult to really understand her. She comes across as rude, obnoxious and I found my sympathy waning more and more as the narrative wore on. Why are Catherine and Ginny friends? They are constantly antagonising one another, both in the present and in flashbacks, acting secretive, and I can’t recall one conversation where they genuinely seemed to get on or care for one another. It’s a shaky foundation to hold the crux of the film’s narrative on and it’s no surprise that everything falls apart around it.

The third key part is Rich, Ginny’s neighbour and occasional partner, played by Patrick Fugit (even 16 years later it’s difficult to see anyone but ‘Almost Famous’s William Miller in him!). His only purpose in the narrative seems to be to antagonise the already anxious and highly strung Katherine, and well he serves this point but to what end? Films about unlikeable characters can still be terrific, but the characters have to at least be interesting or have some form of redeeming features for the audience to invest in. The characters in ‘Queen of Earth’ are merely unpleasant and the script does little to justify why we should care about them.

‘Queen of Earth’ is an aimless movie about awful people, and despite some solid work from Elisabeth Moss, this is one film that is best avoided.