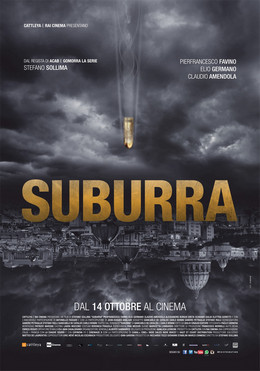 A gangster known as “Samurai” wants to turn the waterfront of Rome into a new Las Vegas. All the local mob bosses have agreed to work for this common goal. But peace is not to last long.

‘Suburra’ is an outstanding movie from Italy, a complex and sophisticated thriller that explores the links between organised crime and politics in Rome. Directed by Stefano Sollima, best known for his work on the TV versions of the Italian crime films ‘Romanzo Criminale’ and ‘Gomorrah’, this is an assured piece of filmmaking that handles a variety of characters and a labyrinthine narrative with a deft hand. The title ‘Suburra’, refers to the name of a suburb in Ancient Rome, which seems fitting in a way for a film that focuses on the attempts of numerous shady individuals to turn a region of Rome into a European version of Las Vegas. This is all under the control of a local crime boss known as ‘Samurai’, a criminal who operates in plain sight as a petrol station owner, whilst negotiating deals with corrupt politicians and fellow criminals to force a bill through to allow the work to begin. Those plans are thrown into disarray when an underage prostitute turns up dead in a politicians hotel room, leading to personal feelings and vendettas getting in the way of business.

Sollima’s depiction of the eternal city couldn’t be further from its cinematic appearances in the likes of Federico Fellini’s work, with the focus on the dark underbelly and decaying vision of a city ruled by criminals and corrupt politicians. The narrative has a sweeping scope that takes in politicians, organised crime and even the Vatican, all key to pushing through the legislation and providing the muscle to get the samurai’s projects approved. In a Europe beset by political scandals, ‘Suburra’ feels more than timely with its depiction of unscrupulous politicians out for themselves and not for the people they are elected to represent. There are many similarities with the British gangster classic ‘The Long Good Friday’, however where that film follows Bob Hoskins ‘Harry Shand’ and his plans for the Thames waterfront throughout, ‘Suburra’ takes in the bigger picture.

Crucial to the film’s success is the atmospheric mood developed largely through the cinematography and the terrific score, made up from a collection of songs by the French electronic band M83. M83’s music fits the narrative superbly, uplifting and full of promise at times, yet reflective and deeply evocative in other moments. Whilst not a score in the traditional sense, M83 have previous experience in producing music for films with the Tom Cruise starring sci-fi ‘Oblivion’ another notable entry. ‘Suburra’ is beautifully shot, making good use in particular of the rain to suggest a darker and grimmer version of Rome than what we’re used too, with a lot of scenes taking place at the dark of night in secretive locations. The performances are excellent throughout the cast, with Pierfrancesco Favino particularly terrific in a multifaceted role as corrupt politician Filippo Malgradi.

All of these strands are drawn together superbly by Sollima for a stunning, uncompromising conclusion that cements ‘Suburra’ as one of the year’s absolute finest films, and I do urge you to catch this while you can, either at the cinema or through VOD.