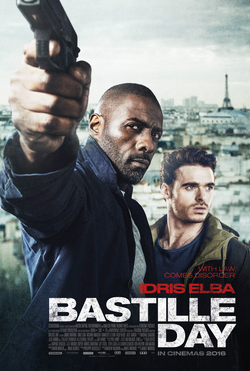 A young con artist and former CIA agent embark on an anti-terrorist mission in France.

Je m’appelle Bond. James Bond.  It’s hard not to look at this low-budget, action-packed romp around Paris as anything but an audition for Idris Elba to be the next 007.  The 90 minutes of hand-to-hand combat, car chases, shootouts and undercover trickery really does zoom by and the question is, does he pass the test? We’ll come back to that. First, it’s important to try to examine this as a movie in its own right.

We begin in offices in downtown Paris, where Idris Elba’s CIA agent Briar is being dressed down by his superiors. We find out he is an insubordinate, reckless and ruthless agent who plays rogue but is ultimately successful (sound familiar?). Briar soon gets teamed up with college dropout and pickpocket, Michael Mason (Richard Madden, or ‘Game of Thrones’ Robb Stark, as he is known to most), who has had the misfortune of stealing a bag containing a terrorist bomb, which subsequently explodes and sets the wheels in motion for a series of terrorist incidents in Paris on the eve of the Bastille Day parade – scenes that probably seemed unlikely when the film was shot, but which sadly are now highly plausible following the events of the Bataclan shootings.

Elba and Madden make an enjoyable odd-couple pairing, despite both unnecessarily speaking in American accents. They play off each other well, with their interaction coming mainly in the front seats of cars as they travel from one action set-piece to the next.  The plot itself isn’t really important here. There are heavily-signposted twists which takes away some of the tension, although I did find it interesting seeing how the terrorists manipulated the public via social media, and I would have liked to have seen more time spent on that.  Kelly Reilly, playing Elba’s boss, and Charlotte Le Bon, as a bomb-mule, are given little to do – though it was refreshing not to see them used as love interests.  Having said that, the female roles aren’t exactly progressive, with the aforementioned Reilly and Le Bon used solely as plot devices without fleshed out characters, and a gratuitous female nudity scene with no real relevance also included.

The film is not without flaws, but that said, I did enjoy it.  For what is clearly a b-movie, it has the all-important fun factor.  This is 99% down to Elba – who remains an incredibly watchable screen presence.  I’m sure his role here would have also been offered to the likes of Liam Neeson or Bruce Willis and with either of those, it wouldn’t have been nearly as interesting.  So, is he good enough to play Bond? Absolutely. He’s certainly my choice.