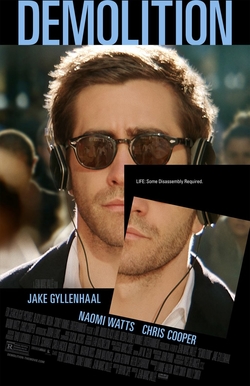 As an investment banker struggles after losing his wife in a tragic car crash, his increasingly confessional series of letters to a vending machine company catch the attention of a customer service rep with whom he forms an unlikely connection.

‘Demolition’ is a difficult film to pin down, mainly from a viewer’s perspective but it also seems to be the case for the filmmakers who never really get to grips with what they want this film to be about. It begins by introducing us to Davis Mitchell (Jake Gyllenhaal), a successful investment banker who loses his wife in a car crash on the way to work one day, struggling thereafter to pull himself together. An incident at the hospital with a vending machine leads to a series of correspondence letters with a customer service rep, Karen (Naomi Watts), and the film is primarily focused on the bond the two characters form as Davis tries to rebuild his life by destroying his old one. Jean-Marc Vallée is a good director and I loved his last three films, but ‘Demolition’ isn’t up to the same standards and he struggles to tie the film’s themes together successfully.

The problems pretty much begin and end with the film’s main character, Davis Mitchell. Jake Gyllenhaal is a terrific actor and he fully commits to the performance which helps to get more mileage out of the material than most, but even his charisma struggles to make Davis a character worth rooting for. Despite the tragic circumstances that begin the film, Davis comes across as selfish throughout, inconsiderate and basically just an asshole who makes decisions that make little sense and damage the people surrounding him. The bond he forms with Karen’s son Chris is touching and in the moments when he takes time to reflect he almost draws some sympathy but a moment of madness is never too far away. Revelations later in the narrative seem primarily designed to make us reconsider our opinion of Davis and his behaviour, but they come too late to explain his behaviour from his wife’s death up to that point. ‘Demolition’ fares better on the comedic side which is bizarre for a film that starts off so tragically, but this is an odd movie!

Gyllenhaal’s excellent performance is the film’s main strong point, but the supporting cast are also great, from Chris Cooper as Davis’ father in law to relative newcomer Judah Lewis as Chris. It’s also directed well, with a lot of skill and flair and the pacing is spot on, but none of these features can truly overcome a bizarre premise that it tries and fails to sell. In spite of all of this I did enjoy ‘Demolition’. Gyllenhaal always captivates, the soundtrack is great, it generates a lot of uncomfortable laughs and there are sporadic moments of valuable insights, but I can’t escape the feeling that the screenwriter thought he was writing something truly meaningful and not the confusing story we end up with.