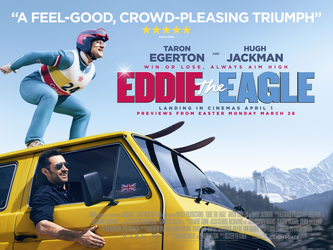 The story of Eddie Edwards, the notoriously tenacious British underdog ski jumper who charmed the world at the 1988 Winter Olympics.

‘Eddie the Eagle’ is a crowd-pleasing treat that more than makes up for what it lacks in story with a lot of heart and charm. Loosely based on the true story of Eddie ‘The Eagle’ Edwards, the first man to represent Great Britain in Olympic Ski Jumping, this is an enjoyable and funny piece of entertainment. I’m not old enough to remember Edwards appearance at the Winter Olympics in 1988 but I’m familiar with his story, which is perhaps testament to the enduring legacy of a man famous for well, not being very good! This biopic from Dexter Fletcher takes a lot of liberties with Edwards story, but it retains the core elements and the focus is squarely on making an inspirational sports movie that shows how Edwards desire was rewarded. In that sense, it achieves what it sets out to do.

Taron Egerton stars as Edwards and I found his performance to be fairly inconsistent throughout. He’s often guilty of overacting and this can be off-putting, but when he manages to find the sweetness and heart within Edwards he absolutely nails it. Hugh Jackman appears as a former ski jumper turned mentor, and he’s a level above everyone else in the film, acting as a strong counterpoint to Edwards relentless optimism as well as providing most of the film’s comic relief. There isn’t much to the story that we haven’t seen in countless other sports movies over the years but that doesn’t mean ‘Eddie the Eagle’ isn’t enjoyable. Fletcher’s approach leans a little too much on the sentimental side at times, but Edwards is such a likable presence that you’re willing to overlook some of the flaws in the approach. There are a few subplots thrown in to add some depth to the film, with an ongoing battle between Edwards and an arrogant member of the Olympics selection committee (played well by Tim McInnerny) the strongest.

‘Eddie the Eagle’ is a sports biopic that plays to all of the clichéd tropes of the genre, but it’s got charisma and a lot of heart and ultimately, the story of Eddie Edwards is one to make you smile.