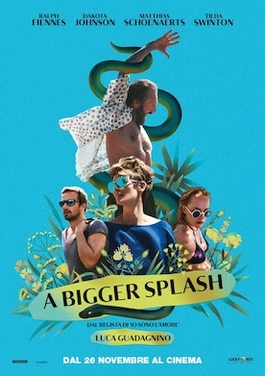 The vacation of a famous rock star and a filmmaker is disrupted by the unexpected visit of an old friend and his daughter.

‘A Bigger Splash’ is an engrossing drama set on a remote Italian island where a vacationing rock star and her filmmaker boyfriend are disrupted by the arrival of an old friend and his daughter. The film is a terrific showcase for four fine performances from the leading cast, with Ralph Fiennes stealing the show as the suave and obnoxious Harry, who’s behaviour is so forward and blatant that it’s almost endearing. Tilda Swinton plays the famous rock star who has lost her voice, Matthias Schoenaerts her partner, and Dakota Johnson as Harry’s daughter. All are brilliant and there’s a captivating chemistry between every member of the cast, with each scene dripping with raw sexuality. You would believe that any of these characters could start getting it on with each other at any given time.

The film begins by introducing us to Marianne Lane (Swinton) and Paul (Schoenaerts) at the beautiful villa they’re vacationing in, surrounded by the sea, beautiful scenery and gorgeous sunshine. It’s a terrific location for the viewer to get lost in, and the setup becomes more intriguing once Harry arrives, clearly unwelcome. Fiennes has a magnificent screen presence as Harry and he sucks everyone into his orbit with an energetic display that allows the rest of the cast to circle around him. It’s clear there is a history between the characters, telegraphed early on, with flashbacks used to fill in the gaps. Strictly speaking I don’t believe the flashbacks were necessary, with all of the performers and the script doing such a good job of conveying the hidden emotions and backstories in subtler ways.

The first hour and a half is superb, energetic and entertaining drama delivered by a series of strong performances, but the film disappoints with the final act that moves the narrative in a different direction. I’d have enjoyed the film as a whole more if director Luca Guadagnino had trusted in his actors, the script and the inherent drama in the premise to see us through to the end without resorting to a plot device that felt out of kilter with what had went before. The previously engaging, fun and sexually charged back and forth between the cast gives way to something approaching a thriller and it doesn’t work nearly as well. Disappointingly, ‘A Bigger Splash’ is another in a long line of films whose trailer telegraphs the full story and if you’ve seen it, this dramatic development will be seen a mile off.

‘A Bigger Splash’ is an enjoyable drama, but it missteps badly in the final act and that ultimately affects my opinion of it overall, but it’s worth seeing for the performances, Ralph Fiennes terrific turn in particular.