Following on from our reviews of the best documentaries, and the worst films of the year, we move on to Part 3 of our year end review of 2015. We’ve compiled our list of the year’s best films and we’ll start by running down from 20-11 – there was a lot of competition this year, but ultimately these are what we’d regard as our favourites. The excellent ‘Mommy’ is the fifth feature film from prolific Canadian director Xavier Dolan, who at 25 has turned in a resume that puts many seasoned directors to shame. The film is about a single mother trying to raise her troubled and violent son and Dolan delivers a heartbreaking piece of cinema through a thrilling level of energy in his direction and deeply emotional performances from the core cast.

‘Ex Machina’ is an intelligent piece of science fiction, with a slow burning script prompting the viewer to think with some great ideas about the nature of artificial intelligence. Alex Garland has been responsible for several excellent screenplays in recent years, often working with Danny Boyle, and he shows an equal knack for directing with the stunning ‘Ex Machina’. The intelligent script is delivered through a trio of high quality performances from Domhnall Gleeson, Alicia Vikander and Oscar Isaac, who have all had terrific years. Thought provoking, insanely clever and gripping throughout, ‘Ex Machina’ is brilliant cinema. Featuring the best Reese Witherspoon performance since ‘Walk The Line‘, ‘Wild‘ is a terrific tale about one women’s quest to battle her demons by hiking 1000 miles of the Pacific Crest Trail by herself. The idea of a film about someone ‘finding themselves’ can be somewhat grating, but ‘Wild’ overcomes this through its charming performances, witty script and good soundtrack and it’s a really enjoyable movie.

The best horror film of recent years, ‘It Follows’ is a standout of the genre through the way it takes a simple premise (a curse is passed on through sexual contact), an unsettling tone, great location shooting in rundown Detroit and one of the year’s finest musical scores. Tense and creepy throughout, ‘It Follows’ is a superb and thrilling psychological horror.

Canadian director Denis Villeneuve’s excellent film about the drug war on the US/Mexican border is a gripping, taut thriller from the man responsible for the intense kidnap thriller ‘Prisoners’. Featuring Benicio Del Toro’s best performance in years and a script that really gets to the heart of the morally duplicitous environment the characters are operating in, ‘Sicario’ is a brutally effective movie. 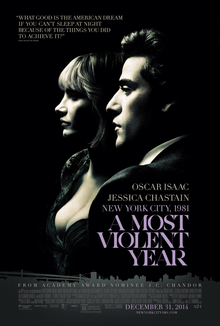 J. C. Chandor’s third film, ‘A Most Violent Year’, is a slow burning mood piece about an immigrant trying to protect his business against a backdrop of crime and violence in New York in 1981. In the lead role, the impressive Oscar Isaac is on top form, kicking off a strong year that contains excellent performances in HBO’s miniseries ‘Show Me a Hero’, ‘Star Wars: The Force Awakens’ and ‘Ex Machina’. This gripping crime drama is the best showcase for his talents yet and it’s well worth your time.

The fifth film in the ‘Mission: Impossible’ series is a good old fashioned thriller that knows how to entertain, and it’s a film that shows a franchise at the peak of its power in terms of knowing its strengths and weaknesses. ‘Mad Max: Fury Road’ aside, I don’t think I had as much pure fun at the cinema this year than seeing this.

The second biopic of Steve Jobs to be released after his death 4 years ago, following on from the Ashton Kutcher starring ‘Jobs’, is a superbly crafted film anchored around three product launches crucial in Jobs professional career. Directed by Danny Boyle from an Aaron Sorkin script, the film bounces with an incredible energy with strong performers relishing the chance to get their teeth into Sorkin’s dialogue. At times, the film seems to operate on a hyper state of reality, almost operatic at times, and I was fully taken in by it all. ‘Girlhood’ is a terrific drama from France about a teenage girl growing up in a troubled area and trying to find her way in life in difficult circumstances. Director Celine Sciamma crafts a moving coming of age story that successfully captures teenage life, both in contrasting happy experiences (an excellent sequence to ‘Diamonds’ by Rihanna) with the real challenges young people face as they approach adulthood.

Actor Joel Edgerton’s debut in the director’s chair is a smart, well directed thriller that almost feels like a throwback to the kind of films that were made regularly in the early 90s. The film focuses on a married couple who move to Los Angeles when they bump into an old schoolfriend, who starts to exhibit increasingly unusual and erratic behaviour. Edgerton’s direction expertly builds up tension and the script shows itself to be a lot cleverer than you would perhaps expect at the start, and it’s one of my favourite films from this year.