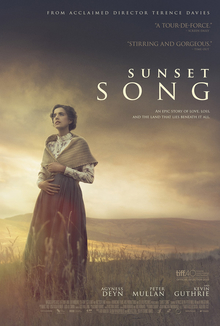 The daughter of a Scottish farmer comes of age in the early 1900s.

‘Sunset Song’ is an adaptation of a classic Scottish novel by Lewis Grassic Gibbon about a young farmer’s girl struggling through life in the early 1900s. The farmer’s girl is Chris Guthrie (Agyness Deyn), and the narrative follows her journey through adolescence as she has to overcome hardship and despair in search of her own independence. The film is wonderfully crafted, with the evocative music and gorgeous sweeping shots of the Scottish countryside bringing up feelings of melancholy and nostalgia for the past, but for lack of a better phrase this film is hard work to get through.

Whilst the film is undoubtedly gorgeous, it does suffer from a bloated runtime and a narrative that is often dull with little happening. However, the main issue I had with the film is that it’s just so unrelentingly miserable, and often at times it seems to be purely for the sake of it. There’s a story to be told about the harshness and devastation that comes from living in this environment at the turn of the 20th century, but ‘Sunset Song’ struggles to give the viewer anything to grab on too. Outwith Chris, everyone is either violent, depressing or downright evil, and the themes get lost amongst this. On the positive side, the performances are outstanding throughout, with Agyness Deyn truly shining in the central role. The English model turned actress hasn’t been in much of note prior to ‘Sunset Song’ but she truly captures her character, excelling in all scenes but the most emotional where she falters slightly. In the supporting roles, Peter Mullan is reliably gruff and dominating as her father and Kevin Guthrie (mostly known for his turn in ‘Sunshine in Leith’) shows depth that I hadn’t seen before.

I haven’t read the book so it’s difficult to grasp whether the book to screen transition has led to some things not working as well in the film, but certainly some aspects falter from a narrative perspective. Chris’ father (Peter Mullan) is utterly irredeemable here, whereas the development of Ewan (Kevin Guthrie) seems quite inconsistent and despite Guthrie’s strong performance, I never fully bought his treatment of Chris regardless of his wartime experiences. The film finishes towards the end of the First World War, but it almost seems like an unnecessary addition to the plot – a way to heap even more misery on the central character without impacting directly on her story. It’s not a big enough focus throughout to resonate, nor is it minor enough to feel like an afterthought, leaving it sitting rather awkwardly somewhere between the two.

‘Sunset Song’ is beautifully created with massive, emotionally resonating performances, but in allowing his narrative time to breathe, Terence Davies adaptation struggles to captivate throughout and the relentlessly depressing tone makes this a difficult watch.