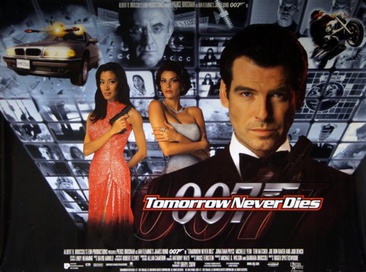 James Bond heads to stop a media mogul’s plan to induce war between China and the UK in order to obtain exclusive global media coverage.

The distance between insanity and genius is measured only by success.

Pierce Brosnan’s second film as James Bond, ‘Tomorrow Never Dies‘, is a film that I never had much time for at the time, preferring the films sandwiched around it in ‘Goldeneye’ and ‘The World Is Not Enough’. With the benefit of hindsight and time, I think I prefer it to ‘Goldeneye’ (I’ll watch ‘The World Is Not Enough’ in a week or so), which hasn’t aged well, although ‘Tomorrow Never Dies’ is a far from perfect Bond entry. The story revolves around a media baron called Elliot Carver (Jonathan Pryce), who is trying to provoke a war between China and the United Kingdom in order to oust the current Chinese government to further his aims of gaining exclusive broadcasting rights in the country. The premise was timely at the time and similar to many late 90s action films that focused on techno terrorists and the media as the primary enemies, and in ‘Tomorrow Never Dies’ this does allow for a light dose of satire that the Bond series hasn’t often gone for.

The film begins with a daredevil sequence on the Russian border, as Bond ignores the orders of his superiors to try and intercept a terrorist transaction involving a GPS encoder made by the US military. Whilst he fails to get the encoder, he does manage to hijack a plane carrying two Soviet nuclear torpedoes before the base is blasted to smithereens. It’s an enjoyable opening to the action in a film that mostly succeeds as far as the action sequences are concerned. The driverless car sequence is still one of my favourite Bond action scenes – a clever invention used to great effect and showing off the technical achievements of the filmmakers, and there are a couple of other entertaining set pieces to tie the narrative together. Beyond this, the film struggles to elevate itself through a combination of a plot that doesn’t set itself apart from the plethora of contemporary action films of the time and characterisation that never does more than purely service the plot.

In the previous review for ‘Goldeneye’, my colleague described Pierce Brosnan as a ‘middle manager’ in the role of Bond, and it’s a great description that carries through ‘Tomorrow Never Dies’ and the subsequent two films with him in the lead role. Brosnan has elements of all the previous Bonds but he has no standout features to elevate his portrayal beyond being merely serviceable. Jonathan Pryce is solid as the main villain and his motivation is well developed, but he lacks the threat required for a good Bond villain. The best Bond villains are the kind of men who you believe could get the better of Bond, either mentally or physically, but Elliot Carver doesn’t meet either requirement. He’s a man who thinks he’s cleverer than he is, and his physical threat is purely doled out by his primary henchman Richard Stamper (Gotz Otto), who is one of the better secondary villains of recent times. Stronger is Michelle Yeoh, who does well with the minimal material she has, and she makes for one of the better Brosnan Bond girls as a character who is able to go toe to toe with Bond and the film’s villains.

Overall, ‘Tomorrow Never Dies’ is an enjoyable entry in the Bond series, matching tradition with a more contemporary feel, but that in turn works against it as it struggles to feel more special than the range of action movies on offer. Next up, ‘The World Is Not Enough’, which I loved at the time, but suspect I may feel differently these days…