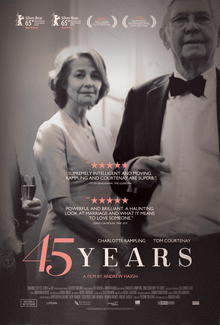 In the week leading up to their 45th wedding anniversary, a couple receive an unexpected letter which contains potentially live changing news.

’45 Years’ is a moving relationship drama about a couple who are disturbed by a piece of news as they head into the week leading up to their anniversary party. Directed by Andrew Haigh, whose previous work includes ‘Weekend’ and the HBO TV Series ‘Looking’, the film takes a fascinating premise and delivers an exceedingly human drama out of its central topic. The film centres on the Mercer’s, Kate (Charlotte Rampling) and Geoff (Tom Courtenay), a couple approaching their 45th wedding anniversary when Geoff receives a letter about his old girlfriend Katja, a woman he was in love with before he met Kate. Katja had fallen to her death in the Alps in 1962 and her body had never been found at the time, and the letter was advising Geoff that they’d finally managed to recover her body, frozen solid in the ice and preserved by time. The letter brings up old feelings and emotions and makes Kate question Geoff’s love for her, and what would have happened had Katja not died.

The film is driven by two outstanding central performances from Charlotte Rampling and Tom Courtenay who give believable portrayals of an elderly couple in love, and they both superbly convey the effect the letter has had on them. Kate is our primary viewpoint and we can feel the hurt and pain she feels through Charlotte Rampling’s excellent, and often silent, work, as she conveys her inner turmoil and emotions with her facial expressions. Opposite her, Tom Courtenay is given less to do, but he acts as a perfect foil for Rampling and in the rare moments when he takes centre stage, such as a terrific speech at the anniversary party, he is outstanding. Both performances are a masterclass, and Rampling in particular deserves to be remembered come awards season.

Some of the strongest moments in the film are smaller character driven scenes or simple conversations between Geoff and Kate where they discuss the situation. Geoff has every right to feel saddened at old memories being brought back to the surface, but he retreats into himself and starts behaving in a secretive way around Kate, which is only heightened when it becomes clear he didn’t tell Kate the full story earlier in their relationship. Kate on the other hand is caught in a theoretical nightmare, wondering how her life could have been completely different had Katja lived, and her feelings for Geoff are compromised by the new revelations. Haigh’s portrayal of a couple who have been married for 45 years is outstanding, showing that even the most loving of couples have secrets, regrets and doubts, and in Courtenay and Rampling, he has two of Britain’s finest actors to convey these feelings.

’45 Years’ is an outstanding character driven drama with a central issue that poses many questions about the nature of human behaviour and how events in the past can impact the present. Charlotte Rampling and Tom Courtenay are wonderful opposite each other, and Haigh’s screenplay and direction subtly draws out the subtext without detracting from the wider story. An outstanding film.