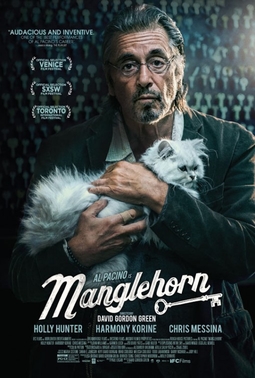 Left heartbroken by the woman he loved and lost many years ago, Manglehorn, an eccentric small-town locksmith, tries to start his life over again with the help of a new friend.

It’s a real shame that one of Al Pacino’s finest performances in years comes in a film without much of a story for him to work with. David Gordon Green has excelled in the past with some great independent movies that have woven strong performances and meaningful moments out of relatively slight scripts, but ‘Manglehorn’ is missing something. Al Pacino plays A.J. Manglehorn, a Texas key-maker who lives at home alone with only his cat for company. Frequent memory lapses and flashbacks indicate something troublesome in Manglehorn’s past that have affected his ability to form meaningful relationships, and the film follows him as he tries to get back on this path with a friendly and warmhearted teller from his local bank (Holly Hunter).

Pacino fully embodies Manglehorn, and a character that could appear grumpy or curmudgeoness is relatable, with a kind heart and charm in Pacino’s hands. When the script lets Pacino down, he does his best to elevate the material and the film is at its strongest when it focuses on Pacino trying to break out of his shell. Hunter is strong as his love interest, whilst there’s a subplot with Manglehorn’s son (played by Chris Messina), which never really illuminates in the way I suspect Green intended. I believe the intention was to draw parallels between Manglehorn settling for his quiet life and focusing on his work, with his successful and driven son, but the comparisons feel a little on point – particularly in one example at a fancy restaurant which lacks any subtlety. Pacino wears the weight of the past on his shoulders and the film is very reflective about the ageing process and the nature of memories and how they can affect us in later life. Green’s movies generally feature strong soundtracks, and the score by Explosions in the Sky here works well.

Overall, ‘Manglehorn’ is a good showcase for a fine, understated Pacino performance, but the story isn’t overly compelling and Green’s film simply meanders along with little to draw you in.