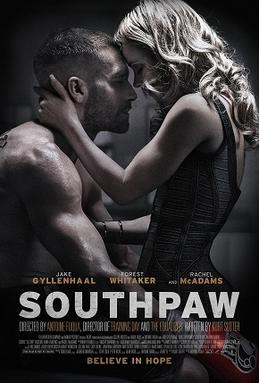 Boxer Billy Hope turns to trainer Tick Willis to help him get his life back on track after losing his wife in a tragic accident and his daughter to child protection services.

Boxing dramas have provided some terrific films over the years, from ‘Raging Bull’ to ‘Rocky’ to ‘The Fighter’, and ‘Southpaw’ comes around with much of the same appeal, and that’s partly what works against it. Southpaw isn’t a bad film but per se, but it’s clouded by what’s came before and it never really escapes from the clichés of the genre, as we follow Jake Gyllenhaal’s Billy Hope as he rises to the top, drops to the bottom, and rises again against all of the odds. The film is focused on Billy Hope, an undefeated light heavyweight champion who spirals out of control after a tragic event (the trailers aren’t exactly shy about revealing what this is). To get his daughter and his life back, he knuckles down and persuades former trainer Titus ‘Tick’ Wills (Forest Whitaker) to train him for a big comeback fight against his nemesis Miguel Escobar (Miguel Gomez).

Gyllenhaal is truly excellent in a full blooded and fully committed performance, and he lifts the quality of the film through his portrayal. It’s an incredible transformation for Gyllenhaal, who lost so much weight to give him the wiry, eye popping appearance from last year’s ‘Nightcrawler’, to bulk up and inhibit the body of a professional boxer. My understanding is that Gyllenhaal chose to do the fight scenes himself and committed to extensive training, and this comes across in the hyper realistic fight sequences which would feel entirely like a real fight if it wasn’t for the obvious way it pans out, hitting all the necessary beats to generate as much drama as possible. That’s not to say it isn’t effective, as the final, crucial fight grips the audience throughout. Gyllenhaal is at his best when he has a good actor to play off and the film steps up a gear once he begins training at the local gym with Tick, played by Forest Whitaker. Whitaker is an actor who can often ham things up (for better or worse), but he wisely underplays his character here and the scenes between Gyllenhaal and him are amongst the films strongest. Rachel McAdams is the pick of the rest of the cast as Hope’s loyal wife, whilst 50 Cent once again makes you wonder why he continually receives acting roles.

Directed by Antoine Fuqua from a script by Kurt Sutter (most commonly known for ‘Sons of Anarchy’ and previously, ‘The Shield‘), ‘Southpaw’ thrives on Gyllenhaal’s performance, but falls down on the lack of originality in the script, with a story that’s been told before, and told better. Overall, ‘Southpaw’ is an enjoyable boxing movie, with a stunning lead performance, but it fails to join the greats.