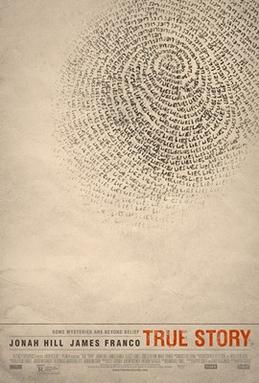 You’re more likely to find James Franco and Jonah Hill starring opposite each other in a Judd Apatow scripted comedy film, but ‘True Story’ is a welcome change of a pace and a strong showcase for both actors in less familiar surroundings. The film tells the true story of Christian Longo (Franco), a man accused of murdering his entire family, who adopts the name of journalist Mike Finkel (Hill) whilst on the run in Mexico. At this point in time, Finkel has reached a crossroads in his career after publishing an article without doing the appropriate fact checking, and he is drawn to the man who adopted his name. In the background, Finkel’s wife (played by Felicity Jones) shares her concerns that Finkel is getting too close to his subject matter, as the film charts the cat and mouse game between the two men after Finkel begins to meet with Longo in prison.

The film is directed by Rupert Goold with the stylings of a TV movie, but it grips entirely through a fascinating story and the strong lead performances. Both actors have shown their range with Oscar nominated roles in dramas such as ‘Moneyball’ and ‘127 Hours’, so it’s not a surprise that the performances are good here, but both Hill and Franco bring great intensity to their performances. Franco has played creepy characters before and he excels here as the unsettling Longo, presenting him in such a way that it’s difficult for Finkel (and the viewer by extension) to get a read on whether he’s being honest or not. Hill’s Finkel is intrigued by Longo from the outset, both by his supposed crime and the reasoning behind adopting his name, and Hill plays the character well from early fascination and suspicion to something closer to friendship. The psychological tension is built up throughout and played out well by both actors and helps to elevate their one on one encounters.

The central mystery is so intriguing due to the close focus on character and less on the mystery itself, with the movie never sensationalising the murders to ramp up the drama. ‘True Story’ has a compelling crime narrative underpinning it, but characters are what drive the film. Overall, ‘True Story’ is a taut crime thriller with terrific lead performances from Jonah Hill and James Franco and it’s entertaining viewing.