Song of the Sea 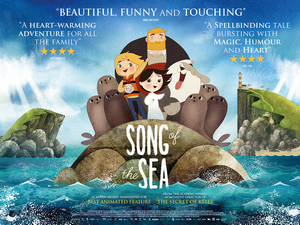 Ben, a young Irish boy, and his little sister Saoirse, a girl who can turn into a seal, go on an adventure to free the faeries and save the spirit world.

‘Song of the Sea’ is a beautifully crafted piece of animation from director Tomm Moore, and it became his second Oscar nominated film earlier this year after 2009’s ‘The Secret of the Kells’. The film tells an enchanting story about a young Irish boy called Ben (David Rawle), who goes on an adventure with his little sister to find her voice and save the spirit world along the way. This is a film deeply rooted in Celtic folk tales, and the script from Will Collins really gets to the heart of the story to bring out its magical qualities. The film begins in 1981 at a lighthouse on the Irish coast, where Ben’s father Conor (Brendan Gleeson) lives with his wife Bronagh (Lisa Hannigan) and their sheepdog Cú. When Ben’s little sister Saoirse (Lucy O’Connell) is born, Bronagh disappears unexpectedly, and this tragic event hangs over Conor and Ben in the years that follow. Blaming Saoirse for his mother’s disappearance, Ben has yet to form a bond with his sister (who hasn’t uttered a word up to this point).

This fantastical tale becomes powerful through its deeply nuanced portrayal of fraternal bonding and touching approach to each and every one of its characters. All of the film’s characters are lovingly created, with a good deal of Irish charm and humour, and Tomm Moore shows empathy to everyone. The relationship between the two siblings grows organically throughout the film’s narrative and it’s touching to see Ben begin to form a meaningful connection with his younger sister, aided by the voicework from the charming David Rawle (of TV’s ‘Moone Boy’) and a collection of eccentric characters that help to introduce real stakes to their adventure. Brendan Gleeson and Fionnula Flanagan lead the voice cast and they’re both excellent, supported well by a collection of little known Irish actors and actresses who help to bring the various characters to life.

The biggest success of ‘Song of the Sea’ is in the way it strongly evokes the past and taps into our childhood love of fairytales, crafting a moving tale of love and loss around the elements of a Celtic folk tale. The gorgeously crafted animation is supported by the beautiful Celtic folk soundtrack from Bruno Coulais and Kíla, which superbly compliments the action on the screen and makes the hair on the back of your neck stand up. ‘Song of the Sea’ is a magical animated tale that should delight children and adults alike, and I highly recommend it.