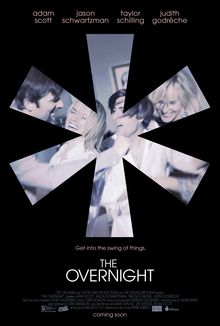 Alex, Emily, and their son, RJ, are new to Los Angeles. A chance meeting at the park introduces them to the mysterious Kurt, Charlotte, and Max. A family “playdate” becomes increasingly interesting as the night goes on.

‘The Overnight’ is a hilarious sex comedy from the Duplass Brothers production school, directed by Patrick Brice and featuring excellent performances from its central cast. The film focuses on a couple (Adam Scott and Taylor Schilling) who have recently moved to LA with their young son in an attempt to start afresh. When they encounter the mysterious Kurt (Jason Schwartzman) in the park when their kids befriend each other, he invites them over for dinner, where the night gets more and more interesting as the evening goes on.

The film often feels improvised which is testament to the excellent performances from the central quartet (add Judith Godreche to those previously mentioned), who all bounce off each other extremely well. Coming in on the short side at only 79 minutes, the film has a natural flow which allows the revelatory conversations between the characters to sweep along nicely without ever getting boring. It helps that the topics of conversation are fairly reflective about what life as a parent as a couple 10+ years into a relationship does to your life, and it entertains the thoughts that these characters undoubtedly have without explicitly acting on them.

The main thing ‘The Overnight’ has going for it is that it’s incredibly funny in almost every way. It’s got terrific dialogue, a tight script that plays with its subject matter but retains the ability to be unexpected, and hilarious body language from the various characters that help to sell every reaction. Adam Scott is perhaps the highlight of the four excellent performers, building on the unassuming persona he’s built up across numerous TV roles and supporting film performances, to create a character both naïve and insecure, but willing to go with the flow. As his wife, Schilling is more reluctant, with her facial expressions throughout absolutely hilarious.

‘The Overnight’ is a hysterically funny comedy with a smart script and terrific performances. Highly recommended (if you can find anywhere showing it!)