The Look of Silence 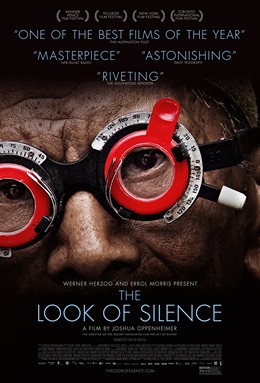 A family that survives the genocide in Indonesia confronts the men who killed one of their brothers.

Joshua Oppenheimer’s follow up to his astonishing documentary ‘The Act of Killing’ takes a further look at the same subject, with a more personal and subdued approach. Both films look at the Indonesian killings of 1965-66, where millions of people were killed when the military overthrew the government and set about purging anyone who opposed them. Like ‘The Act of Killing’, ‘The Look of Silence’ is a powerful look at a country where the perpetrators of these crimes still hold power, with many showing no remorse when confronted with their actions. Where ‘The Act of Killing’ spent the majority of its time taking the interesting approach of asking the perpetrators to re-enact their crimes, drawing parallels between the Hollywood movies of the era and their influence on the gangsters who went on to lead the death squads, ‘The Look of Silence’ is smaller and more personal.

‘The Look of Silence’ introduces us to Adi, an Indonesian man trying to find out about the death of his brother, Ramli, a couple of years before he was born. Ramli, like many others, was accused of being a communist, and he paid for this with his life. It’s important to note at this stage that the term ‘communist’ was used by the perpetrators as a catch all phrase for any individual that disagreed or spoke out against the military government, encompassing non-Muslims and intellectuals alongside people who actively identified as communists. The genocide takes on greater importance when placed in the current context of a country that is still ruled by the people that ordered or carried out these murders at the time, and this casts a shadow over a country that has tried to move on with great difficulty. One of the earliest scenes showcases the disturbing reality that history is written by the victors, as a schoolteacher teaches young kids about the genocide, justifying the killings as the ‘communists were bad people’.

We spend time with Adi and his family (both children and parents), and the interactions with both shine a light on the delicate political climate in the country at this point. It’s mentioned many times by various individuals in the film, that to safeguard the future you must move on from the past. Whilst this is arguably true, it poses interesting questions. Why should people move on and learn to live alongside people who murdered their friends and family, individuals who show little or no remorse for their actions? Adi conducts interviews with family members and perpetrators, framed through the premise of an eye examination, and the discussions are candid and extremely frank. It’s a difficult and disturbing watch at times, and I find it incredible how Adi was not only able to remain calm and collected, but to live amongst these people for his entire life.

‘The Look of Silence’ is another important documentary from Joshua Oppenheimer, working well as a companion piece to ‘The Act of Killing’ and spending more time focusing on the scars left by the killings almost 50 years ago. This is another challenging and provocative piece of documentary cinema, but I’d consider it essential viewing on a period in time that deserves to be remembered.