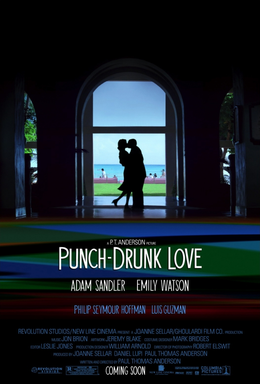 A psychologically troubled novelty supplier is nudged towards a romance with an English woman, all the while being extorted by a phone-sex line run by a crooked mattress salesman, and purchasing stunning amounts of pudding.

Following ‘Magnolia’, Paul Thomas Anderson stated that he would like to work with Adam Sandler, and that he was determined to make his next film 90 minutes long. He succeeded with ‘Punch-Drunk Love’ (OK, it’s 91 minutes with credits), a sweet romantic comedy that is unlike anything Anderson has done before or since. The film tells the story of Barry Egan (Sandler), a man who owns a company that sells a variety of novelty items, whilst leading a lonely life characterised by sporadic fits of rage and anger. He has seven overbearing sisters, one of whom (Mary Lynn Rajskub) tries to set him up on a date with one of her colleagues, Lena (Emily Watson). At the point in which the film begins, we follow Barry as he attempts three things. He attempts to begin a relationship with Lena, he attempts to exploit a loophole in a Healthy Choice promotion to amass a million air miles, and he attempts to escape from people trying to extort him after he phones a sex line.

The initial sex line scene is brilliantly awkward (about as awkward a phone conversation I’ve seen since Jon Favreau in ‘Swingers’), as Barry essentially phones up for conversation more than sexual relief. He appears to have nothing in his life beyond his work and his sisters, and his desperate loneliness is apparent from the outset. Anderson derives humour from the sterile nature of the sex line call, as the lady on the other end of the line is prepared to talk nice only to the extent that she can get Barry’s credit card details, whilst Barry seems nonplussed by the sexual innuendo from the operator on the other end of the line. The fallout from this call is that the people behind the sex line ‘company’ try to extort Barry through threatening phonecalls and further action, which Barry desperately tries to hide from Lena, who he wishes to start a relationship with. This creates one of the best sequences in the film, a virtuouso piece of staging where Lena and Barry’s sister come to his workplace to try and take him out for lunch, whilst the extorters keep phoning and his colleagues keep making mistakes. The filming reminded me of this year’s ‘Birdman’ in the way in which several things are happening in one shot, creating the sense of the environment being ‘alive’ with heavily drum based jazz playing on the soundtrack.

Adam Sandler is truly great in the lead role, showing another side to him that rarely comes out amidst all the terrible comedies he chooses to make. He plays lonely and slightly obsessive extremely well, but the best thing about his performance is how low key and understated he is. There’s none of the overacting we’ve come to expect from him and he reveals an unexpected depth in arguably his best career performance. We see Barry at his lowest points, when his fits of rage take over and when he confesses to one of his sister’s husbands the deep loathing he has for himself, and Sandler quietly sells these moments really well. This is a man who wants help, who wants love and who wants happiness, but is unsure of how to grab it – Lena provides that chance and we root for him to take it. As Lena, Emily Watson is very sweet and charming, giving the impression of another person living within herself and afraid to take a chance at happiness. Watson and Sandler have several great moments throughout the film, but it’s rarely better than the first scene at Lena’s apartment when one character pushes that little bit extra and is rewarded for it.

Anderson regulars Luis Guzman and Philip Seymour Hoffman have smaller roles as Egan’s colleague and the extorter respectively, and Hoffman in particular gets a couple of great scenes where he can show off his angry side, but for the most part ‘Punch-Drunk Love’ is focused on Barry and Lena, with the characters surrounding them only so important as to how they fit into their stories. This is where the biggest difference appears from Anderson’s previous films, which were big ensemble pieces where we got a sense that the character’s existed outwith what we saw on screen; that sense doesn’t exist within ‘Punch-Drunk Love’, and the narrowed scope works better on this particular occasion. Throughout, the film veers between drama and comedy, with most of the comedy particularly dry and coming from ordinary situations (such as Barry frantically running around a large apartment building trying to remember a room he was in 2 minutes earlier).

‘Punch-Drunk Love’ is a quaint little film and somewhat of an anomaly in Paul Thomas Anderson’s resume, but it’s worth seeking out. It’s sweet, funny and features a rare dramatic Adam Sandler performance that makes it all the more disappointing that in the 13 years since this film was released it remains the exception rather than the rule in Sandler’s resume.

Next up, I’ll be watching ‘There Will Be Blood’, an epic drama set amidst the oil boom at the beginning of the 20th century and featuring an Oscar winning performance from Daniel Day-Lewis. My review of that film will be posted in due course.