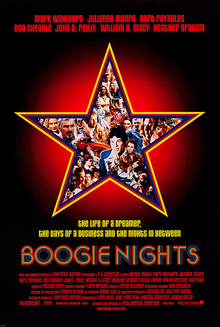 The story of a young man’s adventures in the Californian pornography industry of the late 1970s and early 1980s.

The first thing that grabs you about the film is the attention to detail and how successfully Anderson captures the period on screen, from the costume design to the terrific soundtrack filled with era specific music. This is all conveyed in a wonderful opening sequence which simultaneously introduces us to the film’s era and several of the key players as the camera sweeps around a nightclub owned by Maurice Rodriguez (Luis Guzman). This opening mimics the scene in the casino in ‘Hard Eight’ in style, both in the way the camera sweeps around the environment to give the viewer a real sense of the atmosphere in the club, and in the way the camera zooms in on some of the film’s main characters. Despite the scene being short, we get a real feel for who these characters are and where they sit in the world of ‘Boogie Nights’ hierarchy, and Anderson has achieved in one tracking shot what many other directors fail to achieve in several scenes of exposition.

Anderson’s effortless and stylish direction is great, creating a feel good mood that encapsulates the industry in its heyday before bringing a darker tone in as times get tougher. The camera plays as an observer to the action when required, surveying a room or a scene and taking note of each actor’s slightest movement or reaction, which only serves to highlight the strength of the ensemble. There’s a playful touch to proceedings which gives the film a light feel and the chemistry between the performers keeps the film feeling pacy and energetic, despite the lengthy runtime. That’s not to say the film looks at the industry on purely surface level. Whilst there is a lot of focus on the intricacies of the production process (which is great fun to watch), Anderson never forgets the effect that working in the industry can have on the individuals and the impact this can have on an emotional level is explored through several characters to great effect.

As the tone turns a little darker as we move into the 80s, the similarities with Tarantino’s work come to the fore in the way that comedy and violence are merged to great effect. This is best in a bizarre sequence at drug dealer Rahad Jackson’s (Alfred Molina) house, which manages to be incredibly tense (largely down to the Chinese guy dropping the sparklers everywhere!), violent and very funny. In this section of the film there are a couple of scenes that felt a little too ‘on the button’ and didn’t quite click with the naturalistic, fluid nature of the rest of the film, namely the dual scenes showing Horner beating a guy on the street, and Wahlberg’s encounter with a gay man. This scene felt a little too heavy handed in drumming in the theme that the characters had fallen from their positions of money and power in their 70s heyday. In a 150 minute film though, minor missteps can be forgiven.

The performances are almost uniformly great, from the biggest roles right down to characters that only appear in a couple of scenes. Burt Reynold’s performance as Jack Horner is superb, giving off a sense of power and confidence that emphasises why the rest of the characters in the film gravitate towards him. Julianne Moore received an Oscar nomination (as did Reynolds) for her role as an older porn star and she is also great, in particular in the scenes she shares with Wahlberg where her conflicted feelings on him come to the fore. Wahlberg himself is fearless in one of his earliest roles, successfully playing both the naive youngster and the confident success that he becomes after several films, and his naturally cocky nature helps him to excel. One of the best scenes features Philip Seymour Hoffman’s gay boom operator Scotty J. making a pass at Dirk, which manages to be funny and desperately sad at the same time. Very much a supporting performer in the film, Hoffman’s performance here showcases not only his talent, but the depth of quality throughout the ensemble that shows that anyone can be brought to the forefront and shine.

Next up, ‘Magnolia’, which is Anderson’s longest film, so I’ll need to find a suitable time to set aside and watch it!