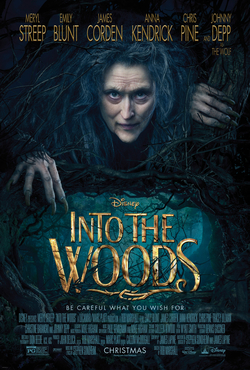 A witch tasks a childless baker and his wife with procuring magical items from classic fairy tales to reverse the curse put on their family tree.

Based on a successful Stephen Sondheim musical, ‘Into The Woods‘ comes into cinemas with a high level of prestige and talent, with an excellent cast led by Meryl Streep and Johnny Depp. Essentially a fairy tale genre mashup, the film features numerous well known fantasy characters such as Cinderella, Rapunzel, Little Red Riding Hood and Jack (of the Giant Beanstalk fame), and the script creates a scenario where these characters individual stories start to intersect. It’s cleverly done, yet something feels missing for me, and there are a couple of key aspects I found fault with which ultimately affected my enjoyment of the film.

Firstly, as a musical, the film is short on memorable songs and the construction of the scenes featuring musical numbers is lacking, with director Rob Marshall (with a history in musical’s, and an Oscar for ‘Chicago‘ to boot) failing to create meaningful moments from the songs outwith the spectacular opening number, which does work well. I’d read previously that ‘Into The Woods‘ as a musical is slightly different from the standard in the sense that the songs don’t really work outwith the context of the story (unlike say the songs from ‘Les Miserables‘ which can stand alone), and I’d agree with those comments, but that doesn’t explain Marshall’s failure to weave them into the narrative in a way that enhances the film. Secondly, the film takes an unexpected and bold turn as it approaches its conclusion, and it opens the story up to new and exciting possibilities. The disappointment comes from the fact that the new setting isn’t capitalised on as well as it could have been, and it feels less like a clever move that breathes new life into these old fairy tales, and more of a twist for a twist’s sake (and to extend the running time of a fairly slight story).

Where the film’s strengths lie is in its performances, and the cast is almost uniformly great. James Corden is serviceable as ‘The Baker’, essentially the character that ties the disparate stories together, and Emily Blunt is good as his wife, but the three best performances come from Chris Pine, Anna Kendrick and Meryl Streep. Pine is full of charm as ‘Prince Charming’ (surprisingly enough!) and he gets some of the film’s best moments, particularly towards the end of the film, and Anna Kendrick shines as Cinderella, with her voice amongst the strongest of the cast and the only character to really put her full emotion into the songs. Meryl Streep has a ‘showy’ part as the witch but she gets the balance right between camp and crazy, and it’s a strong performance that we come to expect from her. The two youngest performers are both solid in their roles, albeit Lilla Crawford’s ‘Little Red Riding Hood’ feels a bit too polished in her first screen role. Regrettably, the performances deserved a better film surrounding them.

‘Into The Woods‘ is a solid take on an interesting idea, but it lacks the memorable songs that all great musicals have and it struggles with its pacing throughout. Too often lacking in emotion, ultimately ‘Into The Woods‘ comes off as a factory produced musical that maintains all of the elements required, but fails to do anything particularly fresh or interesting with the material.