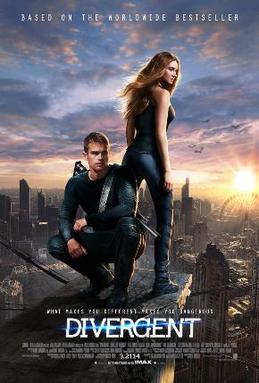 In a world divided by factions based on virtues, Tris learns she’s Divergent and won’t fit in. When she discovers a plot to destroy Divergents, Tris and the mysterious Four must find out what makes Divergents dangerous before it’s too late.

Another film in the long line of YA (thats young adult to you and me) adaptations to hit the big screen, following in the footsteps of successes like the Twilight and Hunger Games series, and several potential franchises that haven’t connected with audiences. This is more in the Hunger Games vein, with Shailene Woodley’s Tris a very similar protagonist to Jennifer Lawrence’s Katniss, and it’s pretty good. The world dynamic is set up through a voiceover at the beginning to explain that after a great war, everyone is assigned to a different faction to ensure that peace is maintained. Tests are carried out to establish which faction is the best fit for each person, and then they have to make a choice – the intriguing set up is that Tris doesn’t naturally fall into any specific category (known as Divergent), and these people threaten the ‘faction’ system.

The film both benefits and suffers from the lengthy setup. It’s good for character development and for world building – we get a real sense of how this world is set up and we spend plenty of time with the key characters, both main and supporting, as Tris goes through her training for the faction she eventually chose. On the downsides, this does make for a lengthy introduction without a great deal of payoff, and the concluding moments of the film feel a little rushed. That’s where my main disappointment in the film stems from – the final action based moments feel rushed, and a couple of key character deaths aren’t given the time or weight to be truly meaningful, not to mention some of the awfully cliched romantic moments that pepper these final moments.

Shailene Woodley is excellent in the lead role, in almost every scene and holding the audience’s attention. She’s joined by a combination of young actors (Theo James, Miles Teller, Zoe Kravitz) and some more experienced names (Kate Winslet, Ray Stevenson, Tony Goldwyn). The acting is solid if unspectacular from the support, with Jai Courtnay perhaps the finest as an antagonistic trainer, back to form after his turn in the dreadful fifth Die Hard installment. As far as franchise openers go, this one did its job – its successfully built its world, introduced its characters and left a sense of intrigue for the next instalments, and I’ll be looking forward to the sequel.