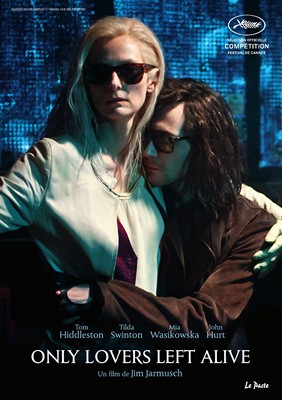 A story centered on two vampires who have been in love for centuries.

Only Lovers Left Alive is the story of two centuries old vampires, conveniently called Adam and Eve, played by Tilda Swinton and Tom Hiddleston, who reconnect after a short period apart. Set in both Tangiers and Detroit, the film makes good use of Detroit’s past in several scenes exploring its former landmarks and glories, and this reflects the film as a whole and the outlook of the two main characters. Both have been around for centuries and to an extent are circling the drain – it turns out even vampires can get bored off their surroundings. There are a couple of subplots involving Eve’s sister, played by Mia Wasikowska, who brings some havoc to their quiet life, and Anton Yelchin’s human, but for the most part, the film meanders throughout time and without much plot.

That’s the problem for me – it just isn’t overly interesting, and the main characters are so closed off we can’t even get a feel for them. The performances are good all round, although Jeffrey Wright is completely wasted as a doctor supplying Adam with blood, and the direction is smart with some interesting choices (I particularly liked the drug-like state they went into after drinking blood, as well as the striking opening spinning round the room as the record played). It’s a shame as the film threatens to liven up on several occasions but it never really gets there, and I suspect that was the point, but that was a major problem for me and the film really felt like a drag.