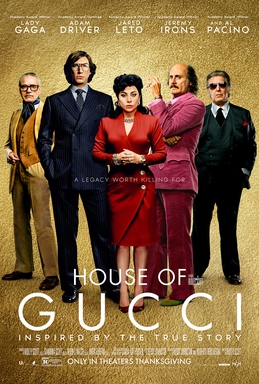 When Patrizia Reggiani, an outsider from humble beginnings, marries into the Gucci family, her unbridled ambition begins to unravel their legacy and triggers a reckless spiral of betrayal, decadence, revenge, and ultimately…murder.

Ridley Scott’s been a busy man of late and this is his second film to come out in as many months following on from October’s ‘The Last Duel’. This one also features Adam Driver but that is where the similarities end, as ‘House of Gucci’ is an altogether more salacious, tabloid-esque tale of murder and betrayal within the family behind the famous fashion brand Gucci. The primary focus of the movie is on the relationship between Patrizia Reggiani (Lady Gaga) and Maurizio Gucci (Adam Driver), one of the heirs to the Gucci brand and fortune. Their romance plays out against a backdrop of infighting within the Gucci family as various individuals fight for control of the company, turning family member against family member.

I really liked this film and thought it was wildly entertaining, helped by some terrific performances mainly from Lady Gaga and Driver, who are incredibly compelling particularly when acting opposite each other. I liked that the film embraces the campier side of the story and whilst some may struggle with tonal shifts from that to the more serious nature of murder, I felt it was entertaining enough to justify it. The main cast is rounded out by Al Pacino, Jeremy Irons, Salma Hayek, Jack Huston and Jared Leto, the last of which is likely to generate the most discussion. Leto isn’t exactly averse to drastically altering his appearance or mannerisms for roles and this is perhaps his biggest transformation (he looks very like Peter Stormare!) yet to play the dimwitted Paolo Gucci – I still can’t decide if his performance is good or bad but he was certainly entertaining. And to be honest, that’s the central crux of the film – for all it is a little too long, a bit indulgent, and it veers from one thing to another, it is an entertaining rollercoaster ride and that’s exactly what I came for.

It’s not exactly a spoiler to mention there’s a key murder within this story and whilst the buildup to that event is the central focus, I was just as invested in the business dynamics as well. I also really liked the soundtrack (if you like 80s music, so will you) and I thought overall, ‘House of Gucci’ was an interesting story, well told by Scott and his cast, and I had a blast watching it.