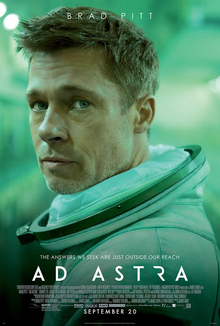 Astronaut Roy McBride undertakes a mission across an unforgiving solar system to uncover the truth about his missing father and his doomed expedition that now, 30 years later, threatens the universe.

‘Ad Astra’, meaning ‘To the Stars’ in Latin, is the latest film from James Gray, a thought provoking and philosophical science fiction movie anchored by a mesmerising central performance from Brad Pitt. Pitt stars as Major Roy McBride, a decorated astronaut who is tasked with performing a secret mission that will take him across the solar system via the moon, Mars and ultimately towards Neptune. It’s a film that is more interested in ideas than action, and I think of films like Tarkovsky’s ‘Solaris’ or Nolan’s ‘Interstellar’ as key touchstones for the approach Gray is going for here.

Our first introduction to McBride is to witness him surviving a dangerous incident caused by a mysterious power surge, which we soon learn is potentially linked to the Lima Project, a mission to the farthest reaches of the solar system in search of intelligent life. Nothing has been heard from the mission for 16 years, but there is evidence that the mission leader may still be alive, and he just happens to be Roy’s father, Clifford (Tommy Lee Jones). Naturally, McBride is tasked with leading the search party. I found the premise and approach to be reminiscent of Captain Willard’s quest to find the almost mythical Colonel Kurtz in ‘Apocalypse Now’ (which I had the pleasure of seeing at the cinema on a re-release a few weeks ago), and indeed James Gray has cited Joseph Conrad’s ‘Heart of Darkness’ as an influence (that novel being the inspiration for ‘Apocalypse Now’ as well). As McBride continues on his journey deeper into the abyss and further away from civilisation he’s forced into confronting who he is as a person, as well as his relationship with his estranged father. Pitt’s performance is remarkably low key and intensely moving, and after a career of strong performances he may have just stumbled upon two of his best this year (along with ‘Once Upon a Time in Hollywood’).

I liked the film’s design work, primarily the subtle ways it nods at the future with commercial flights to the moon and sparse communities that have established themselves in these outposts, with the same commercialisation as we’ve became accustomed to back home. As McBride reaches his destination, it’s almost naturally anti-climactic in the way a myth rarely lives up to expectations, but Gray’s smart direction and Pitt’s performance makes a story set in the stars become second to the story of a son reconnecting with a father, with all the emotion that comes with it. I was quietly moved by it, and ‘Ad Astra’ managed to conjure up moments of great wonder and beauty that frankly only the best science fiction can manage to do. Shout out as well to Max Richter’s perfectly matched score, which really enhances each individual moment on screen.

‘Ad Astra’ is an intelligent science fiction movie with one of Brad Pitt’s finest career performances and I enjoyed it immensely.