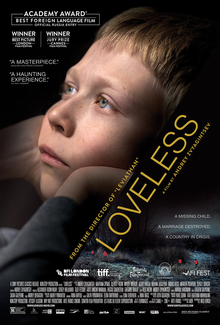 A couple going through a divorce must team up to find their son who has disappeared during one of their bitter arguments.

‘Loveless’ is a bleak family drama that focuses on a couple who have (as the title suggests) fallen out of love, spending most of their time arguing as they’ve grown to resent each other over time. Those characters are Zhenya (Maryana Spivak) and Boris (Aleksey Ronin), and it is established that they got married after Zhenya got pregnant 12 years earlier with their only child, Alexey (Matvey Novikov). We are introduced to him at the beginning of the film as he walks home from school by himself, not in any hurry to get back to the strained and awkward atmosphere his parents have created. Both Zhenya and Boris are so self absorbed in their own problems that they have became completely oblivious to the effect they are having on Alexey, and it’s only when he goes missing that they start to show an interest.

Russian director Andrey Zvyagintsev’s last film, ‘Leviathan’, was one of my favourites of 2014, a stunning piece of cinema that explored the corrupt underbelly in Russian society, and ‘Loveless’ is almost as good. It’s not a particularly pleasant watch at times and it can be difficult to spend so much time with characters as selfish and unlikeable as Zhenya and Boris, but Zvyagintsev makes it utterly riveting. The material is made so riveting by the smaller moments and touches that subtly emphasise the film’s points, such as a mesmerising sequence near the beginning where Alexey’s parents are embroiled in another heated argument. The camera moves around their house circling Zhenya and Boris when a door is opened to reveal Alexey listening in, crying silently whilst his parents are completely unaware, uninterested or both. It is unbelievably powerful and heartbreaking. As much as anything, ‘Loveless’ is a potent morality tale about the dangers of having children if you’re not truly invested in having them, and Alexey is a sad example of the family environment many children find themselves in across the globe.

Once Alexey goes missing the film spends most of its time on the missing person hunt which allows Zvyagintsev to delve into political themes like the ineffectiveness of the Russian police force, who are shown to be uncaring and of limited use, with the search heavily reliant on volunteers to try and find Alexey. The film is set in 2012 ahead of the Russian military intervention in Ukraine and references to this are peppered throughout primarily in radio excerpts, building on the themes Zvyagintsev explored in ‘Leviathan’ about the failure of the state and his growing dismay with their actions. The film is shot with darker tones and lighting, emphasising the cold, unforgiving landscape where it never feels like it’s truly daytime, and this dovetails neatly with both Boris and Zhenya who are now in new relationships and potentially on the same path to destruction that ruined their own relationship.

I was never anything less than fully gripped by ‘Loveless’, which has the same urgent dynamism as ‘Leviathan’. It is directed with intensity and an ominous atmosphere that feels more reminiscent of horror cinema than a family drama, and Zvyagintsev uses this backdrop to deliver a powerful riposte on both the family dynamic and the sterility and lack of empathy at the heart of modern Russian society. This is the first of the ‘Best Foreign Language Film’ Oscar nominees that I’ve seen and it once again asserts this category as the most interesting and varied category, and I’d always recommend seeking out the films that find their way in here.